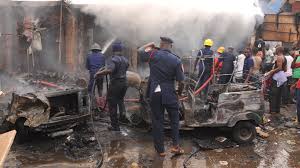 The Borno Police Command has confirmed that the death of 20 persons in the suicide bomb attack at the popular Monday Market in Maiduguri.

The police spokesman in the state, Mr Gideon Jubrin, gave the figure while speaking with newsmen Saturday in Maiduguri

According to Jubrin, 18 persons sustained various degrees of injury in the blast which occurred at the Yen-Kaji section of the market, where live chickens are sold.

“The casualty figures are 20 dead and 18 injured, including the female suicide bomber who detonated the Improvised Explosive Device.”

The explosion occurred at about 12: 15p.m. and was suspected to have been detonated by a female suicide bomber.