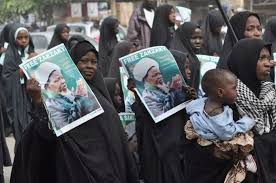 By Sadiq Umar – The FCT Police Command on Monday confirmed the arrest of about 115 protesting members of Islamic Movement of Nigeria (IMN), just as it dismissed reports that some protesters were killed.

The IMN also known as Shiites took to the streets in Abuja on Monday morning to demand release of their leader, Ibrahim El-Zakzaky, whom the Nigerian government has kept in custody for over two years, without trial and despite court orders for his release.

The protesters had earlier gathered at the Unity Fountain Park, near the Transcorp Hilton, Maitama Abuja but were dispersed by the police who accused them of constituting nuisance and threat to the peace.

The Monday protest took the sect to the central area of the city where they were in confrontation with the police who dispersed them with water cannon vehicles.

Leaders of IMN said over 200 of their members were arrested during the protest, but the police gave a lesser figure in their account of the incident.

“One hundred and fifteen (115) members of the sect were arrested at the scene by police operatives,” Abuja police spokesperson, Anjuguri Manzah, said in a Monday night statement.

Manzah, a deputy superintendent of police, said 22 officers were injured. He debunked reports that some protesters were killed.

“Contrary to speculations from some sections of the media, no life was lost in the violent protest,” Mr Manzah said, adding that the police have commenced investigation.

“Joint team of detectives from the command” and “operatives from the IGP Monitoring Unit have commenced investigation into the incident,” he said. “The arrested suspects will be charged to court upon the conclusion of investigation.”