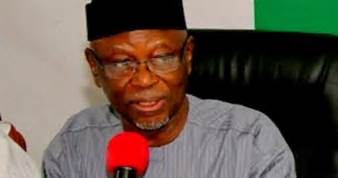 By Nuel Suji – National Chairman of the All Progressives Congress (APC), John Odigie-Oyegun has disclosed that the ruling party will hold its national convention this year.

Two years into its administration as the ruling party, the APC is yet to hold any convention owing to some internal contradictions.

The party’s National Chairman made the disclosure during a courtesy call by APC delegation from Niger State led by State Chairman, Mohammed Jibril Adamu.

He said the National Working Committee of the party is awaiting the conclusion of plans on the convention.

Oyegun said that despite several challenges inherited by the President Muhammadu Buhari administration from predecessor regimes, the government has continued to implement the Change Agenda to restore the country on the path of growth and development.

The delegation comprising party state executives and other political appointees from Niger State paid the National Chairman a solidarity visit at the Party’s National Secretariat in Abuja on Tuesday evening.

The APC National Chairman told the delegation that the party’s National Working Committee (NWC) has worked assiduously to ensure the unity of the APC that was created out of other progressive-minded parties during the 2013 merger.

While praying for the speedy and full recovery of the President, Odigie-Oyegun stated that although the task placed on the president to rebuild the nation was difficult, the administration is already tackling the country’s several challenges and recording successes in different facets.

“The leadership of the Party, in this case the National Working Committee (NWC) has tried to the best of its ability to do the difficult process of welding together the Party that was created out of three, four other Parties. It has not been easy as you very well know. But we thank God that by and large, it has been a significant success” he said.

According to him, “It is a very difficult task that we have all thrust on the President. We had to deal with a predecessor regime whose hallmark was corruption. A regime that had lost all vision; that had lost all interest in developing our nation given the kind of resources that were available. A regime that instead of developing wasted our national resources such that as at the time we were taking over, there really was nothing. The economy had already collapsed. Salaries were not being paid. Public infrastructure had collapsed. Price of oil had also collapsed.

“So, the President had a very difficult situation to handle. It is not surprising then the kind of pain that a lot of our brothers and sisters are going through today. One will depend on people like you to help us pass the message to our people that this is just a passing phase, this is an evil that was created by predecessor regimes.

The President and his team are working flat out to make sure that our economy is diversified and our nation no longer depends on oil only. I pray that God restore the President to complete health so that he can continue the mission.

“There is no magic to it. It is taking time, but this country will never go back to the bad old days where all we did was divide the money from oil. Today, I am very proud of the accomplishment of states like Kebbi, Jigawa, Zamfara and the rest of them in agriculture. Today, Nigerian rice is becoming what we all eat. Tomorrow by God’s grace, we will be able to export Nigerian rice to the rest of Africa and far beyond.”

The APC National Chairman informed the delegation that the Party will hold state congresses this year.

Earlier, the Chairman of Suleja Local Government Council, Hon Abdullahi Shuaibu Maje who spoke on behalf of the delegation said the people of Niger State and indeed Suleja Community have stood firm, have faith and voted for great Party the APC at all levels since 2015.

According to the council chairman, the delegation resolved to pass a vote of confidence on the APC National Chairman on account of his leadership style and for managing the affairs of the Party well.

“You led the greatest mega opposition party ever in the history of our country and the African continent to defeat a so-called biggest ruling party and the most corrupt in the annals of the history of Nigeria, the PDP in the 2015 general election which brought in the current Government of Change. We are proud of you and we are proud of our great party the APC at all levels,” Maje remarked.

The council chairman reaffirmed the delegation’s belief in the Change Agenda of the administration at the federal level led by President Muhammadu Buhari and at the state level led by Niger state governor, Abubakar Sani Bello.

“We acknowledge the tremendous achievements of the federal government under the able leadership of President Buhari in the area of fight against corruption and embezzlement of public funds, economic recovery and transformation, massive capital infrastructure development across the country and security of lives and property by defeating the menace of Boko Haram and kidnapping across the country. We pray that God Almighty gives the President good health, quick recovery and wisdom to come back home and continue with his good work.

“Also, the Niger State Governor has done wonderful well in both infrastructural and human capital development of the state in the last two years.” He said.

The council chairman said complaints arising from an inconclusive congress held in 2014 from Suleja Local Government Area required the attention of the National Chairman to address in order to calm nerves and help the APC come out stronger in the leadup to the 2019 general elections.