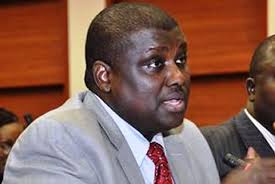 By Nuel Suji – The Senate investigation into the controversial reinstatement and promotion of former Chairman of Presidential Taskforce on Pensions, Waziri Maina took a new twistThursday, with the Ad-hoc Committee receiving a fresh mandate to probe into the alleged re-looting of over 222 properties recovered by the disbanded Taskforce.

Chairman of Senate’s ad-hoc committee, Emmanuel Paulker who made the startling revelation at plenary had told the senate of the alleged “re-looting of properties recovered by the Taskforce by the officials of the Economic and Financial Crimes Commission (EFCC).

Mr. Paulker who expressed shock at the new revelation requested the Senate to expand the scope of the committee’s investigation in unravelling those involved in the re looted properties.

Mr. Paulker stated that his committee got to know about the re-looted properties from submissions made by invited government officials connected with the failed reinstatement and promotion probe.

“For this alarming revelation sir, this committee request the senate to expand the scope of its investigation on Maina by extending it to the management of assets recovered by him and handed over to EFCC before his removal as Chairman, Presidential Task Force on Pensions in 2014 and by so doing, extend the duration of the assignment,” Mr. Paulker said.

The Senate President, Bukola Saraki, however, put a voice vote to the request of which majority of the senators approved answered in affirmative “yes”

Mr. Saraki in his remarks directed the committee to do everything possible to unravel those behind the alleged “re-looting” and report back in four weeks.

The Senate President expressed surprised at the allegation saying, “this is a very serious matter and more of large scale corruption going on in a forbidden place, we just hope that it remains at the realm of allegation and not as it is presented”.

The Paulker led committee had in the last two weeks met behind closed door with the Attorney General of the Federation (AGF) Abubakar Malami, the Minister of Interior, Lt. General Abdulrahaman Dambazzau (rtd), Chairman of the Federal Civil Service Commission, Mustapha Sulaiman among others on their alleged roles in the failed reinstatement and promotion of Maina by the Federal Civil service Commission after three years of disappearance from the public space on the alleged mismanagement of pension funds.