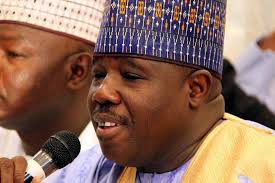 By Sadiq Umar – The People’s Democratic Party (PDP) peace parley convened by former President, Goodluck Jonathan may have ended in deadlock with the controversial National Chairman of the party, Ali Modu Sheriff, storming out of the peace meeting Thursday.

Mr. Modu Sheriff stormed out of the meeting presided over by Mr. Jonathan, saying he was the rightful person to preside over such meeting since he is the one legally recognized as national chairman.

The meeting which was held at the instance of the former president, had in attendance some PDP governors, Chairman of the Board of Trustees (BoT), Senator Walid Jibrin, former senators among other notable leaders of the party.

“We were here for PDP stakeholders’ meeting and the PDP has only one national chairman, which is Ali Modu-Sheriff. There is no PDP meeting that will take place under whatever arrangement that I will not open the session as national chairman.,” Mr. Modu Sheriff told journalists when he suddenly came out of the meeting.

The controversial national chairman who arrived the Yar‘Adua Centre, venue of the meeting long after Mr. Jonathan, the governors and other prominent party leaders retorted: “Today, I am the most senior member of this party.”

Mr. Modu Sheriff also expressed anger that he was disallowed by Mr. Jonathan from addressing the meeting in his capacity as the national chairman of the party.

He said he would not be party to any arrangement that seemed to deviate from the recommendation of the Dickson committee.

“I think Governor Dickson made a proposal for reconciliation. And we have accepted. Some people want to deviate from this programme, to bring agenda which was not part of it.

“And as national chairman of the party, what I have told you people in my office when Dickson brought the report is the only thing that we have agreed at this moment. And I will not be party for anybody using me to do another programme. I’m not going to be part of it.”

According to him, Jonathan should not have called the meeting without consulting him.

He added: “Well, I respect him but calling for the meeting. He is a former President. But as of today, I am the most senior member of the party.

“Therefore, if I respect him, the respect must be reciprocated. You can’t call me for a meeting of PDP and say I cannot address the meeting as national chairman of the party.”

However, the Governor of Ekiti State Ayodele Fayose, said the fact the Modu Sheriff walked out on the party leaders could not have stop the parley.

“The fact that he stormed out does not mean that the meeting did not hold,” Mr. Fayose said.