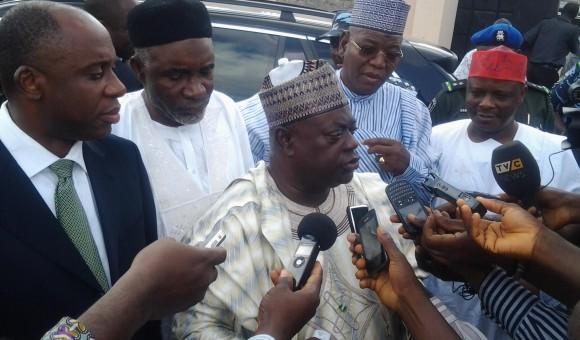 The Abubakar Kawu Baraje led faction of the Peoples Democratic Party, PDP has described the court decision upholding Former Osun State Governor, Olagunsoye Oyinlola as the authentic national secretary of the party as a vindication of their struggle for due process with the ruling party.

The group who emerged from a marathon meeting yesterday in Abuja, however, said that Oyinlola may not  resume today until after all due processes have been satisfied.

” We are very happy with what has happened and the Secretary General will resume his office appropriately after all due process have been covered. And we think it is a vindication of what has been transpiring because all along, the issues were issues of due process, issues of reform and we are happy that the court has done this for us.

The meeting which took place at the Kano State Governors Lodge, Asokoro Abuja was attended by the seven aggrieved PDP governors alongside the Baraje factional exco.

The governors expressed readiness for a peace meeting with President Goodluck Jonathan saying the onus was on him to call for a meeting to end the crisis within the party.

“The onus is now on the President. We are waiting for the invitation,” declared Governor Babangida Aliyu who spoke for the group at the end of the meeting.

On whether Oyinlola would resume today, he said: Not yet, not officially. As far as I am concerned, we should look at it as more positive or rather a plus for the resolution of the matter.

Governor Aliyu said the group was happy with the reinstatement of Oyinlola at the Appeal Court, pointing out that it was part of the issues the group has been fighting for which has to do with due process.

“The moment he gives notice and all parties involved were served papers, he would resume as PDP national Secretary,” he added.“So we look forward to resolution and future resolution of matters.

Present at the meeting were  the chairman of the Northern States Governors’ Forum, NSGF, and Governors of Niger State, Aliyu;  Chibuike Amaechi of Rivers State; Rabiu  Kwakwanso of Kano; Murtala  Nyako of Adamawa ; Aliyu Wamakko and Abdulfattah Ahmed of Kwara, just as Sule Lamido of Jigawa was absent, but represented by his deputy.