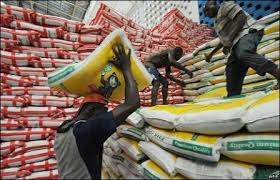 By Nuel Suji, Abuja – Chairman of the Umza International Farms, Mohammed Abubakar Maifata, has denied the involvement of his company in smuggling of rice, even as he dismissed media report‎ on massive fraud in Nigeria rice import scheme.

But reacting to the report Sunday, Mr. Maifata, a ranking lawmaker in National Assembly and Chairman of the company said rather his company has contributed immensely in enhancing the country’s local rice production through its Kano plant.

He claimed that the report was sponsored by some foreign and local merchants who are all out to thwart the success being recorded in the country’s rice value chain.

“It is most disheartening that an online Newspaper claimed to have conducted an investigation into the alleged massive fraud in the rice import quota and even went ahead to publish their falsehood without even respecting the basic tenets of journalism of hearing from the other side who were maligned by their malicious falsehood before publication,” Maifata said in a statement made available to newsmen in Abuja.

“The truth and the fact of this matter is that Umza International Milling Plant has a current milling capacity of 72,000MT per annum and the company is currently in the process of further increasing the milling capacity to about 120,000 metric tons per annum.

“In this vein, we challenge the online newspapers, its paymasters and sponsors to a working tour of Umza International Rice Milling Plant in Kano at our expense in the company of independent experts from any part of this world to determine the true capacity of our mill,” he said.

Shedding light on the investments of his company in the rice value chain, he said Umza Farms has been partnering with USAID in the last three years in the training and sponsoring of over 10,000 rice paddy farmers.

“Our partnership with Rice Farmers Association in Kebbi State is another area where Umza Farms has proven its investments in rice value chain where we are currently working with farmers especially from Suru Local Government Area in the cultivation of paddy.

“Umza International Farms has also secured the approval from Niger State Government for 11,000 hectares of land in Agaie Local Government Area of the state for its backward integration programme,” he said.

Describing the report that Umza has been importing foreign rice from Thailand as laughable, he said the record of his company on the importation of rice is very straight and well documented with both the Nigerian Customs service and other relevant organizations.

“It’s also very important that we state at this juncture that Umza Farms has only imported rice in occasions where the Federal Ministry of Agriculture and Rural Development had genuine fears about the capacity of the local millers to meet the local rice consumption/demand and had encouraged the local rice millers to import rice in order to bridge the gap between what is locally produced and what is consumed.

“Outside these occasions where Umza Farms is duly licensed to import rice for national interest, Umza Farms has not and never imported rice as part of its core business plan. Umza Farms is strictly a local rice milling plant and would never dabble into rice importation as its ordinary business.

“It’s so unimaginable to think that Umza Farms could be waging a war against its own business going by the falsehood perpetrated by the online when it maliciously and literally stated in the said online publication that Umza Farms is involved in rice smuggling,” Maifata who is also the National President of Rice Processors Association of Nigeria(RIPAN) said.