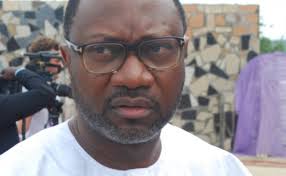 By Dipo Awojobi – World billionaires ranking outfit, Forbes, has removed the names of Nigeria’s Femi Otedola from its list of African billionaires.

With a fortune now pegged at $550 million, Otedola, Chairman of Forte Oil Plc, has fallen out of the ranking of Africa’s billionaires.

The oil tycoon’s fortune million plunged from $1.8 billion following a massive drop in the stock price of his petroleum marketing company.

As at the close of trading on Friday, the company’s share price plunged to a one-year low of N145 ($0.44) per share, down from an all-time high of N342 ($1.1) in March this year when Forbes published its annual ranking of the world’s richest people.

Apart from the tumble in Forte Oil’s stock price, Otedola’s fortune has also been adversely affected by a Central Bank of Nigeria (CBN) devaluation of the Naira in June.

In dollar terms, the devaluation in addition to Forte’s floundering share price has knocked about $1.3 billion off the value of Otedola’s fortune which was pegged at $1.8 billion in March.

According to Forbes, “Investors are dumping Forte Oil’s shares as a result of wide-spread disappointing results of Nigerian Companies of which Forte Oil Plc is also not immune.

“Sources also attribute the results to reduced demand for energy consumption as a result of the recently increased pump price which has adversely affected the fortunes of oil marketing companies in Nigeria.”

Forte Oil is primarily engaged in the distribution of petroleum products such as diesel, aviation fuel and premium motor spirit (PMS).

Otedola’s close ally, Aliko Dangote, remains the richest man in Africa and number 51 on global ranking while Bill Gates is still the richest in the world with $75 billion.