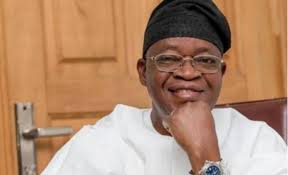 By Alaba Ajibade – Gboyega Oyetola, the Chief of Staff to the outgoing governor of Osun State, Rauf Aregbesola, has emerged the flagbearer of the ruling All Progressives Congress (APC) for the September 22 governorship election in the state.

The Chief of Staff won a total of 127, 017 votes to defeat his closest rival and Deputy Speaker of the House of Representatives, Lasun Yusuf who polled a total of 21,975. and sixteen other aspirants in the party primary.

The Speaker of Osun State House of Assembly, Najeem Salam, emerged a distant third with a total of 17, 958 votes.

The primary held Friday through a direct voting system, in the 30 Local Council areas of the south west State.

Earlier, the Secretary to the State Government (SSG), Moshood Adeoti and Jide Omoworare, a senator, announced their withdrawal from the race.

The Chairman of the electoral panel and Zamfara State Governor, AbdulAzeez Yari expressed satisfaction with the primary election.

Mr. Abdulaziz who was represented by Ovie Omo-Agege, Delta senator while declaring the final result Friday night at the APC State secretariat in Osogbo, the State capital said Oyetola has satisfied every requirement of the party’s constitution.

Mr. Omo-Agege urged other aspirants to support the winner, so as to win the forthcoming election in the state.

The winner of the primary is a native of Iragbiji in Osun central Senatorial district.