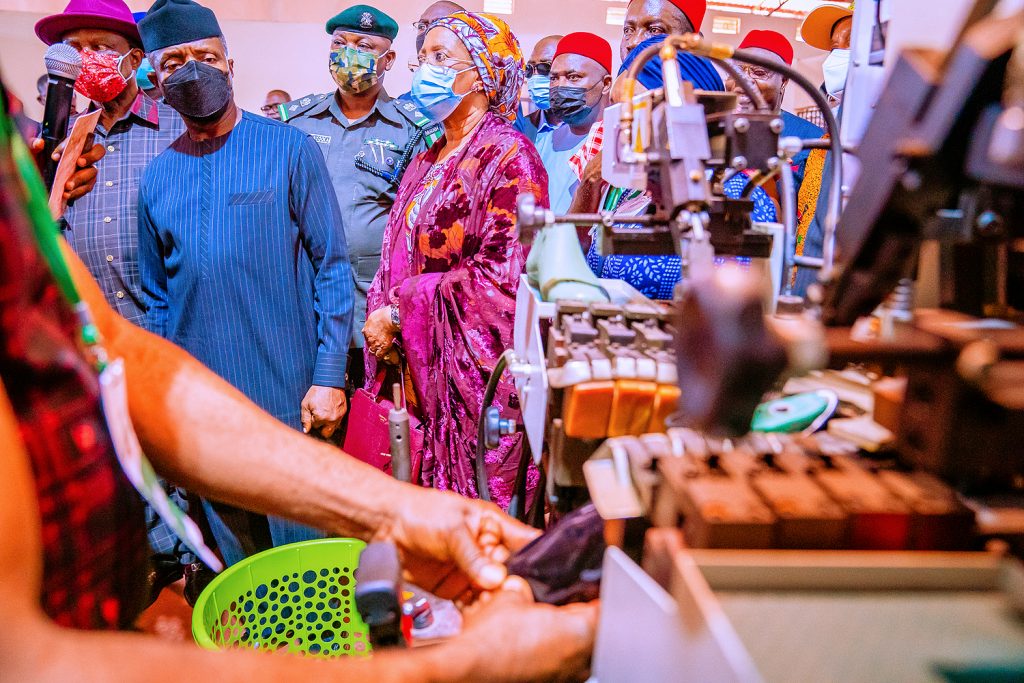 Mr Osinbajo said the shared facility comprised about 200 world class both manual and fully automated fashion equipment with a capacity to service 350 MSMEs daily and 110,000 yearly.

He said that MSMEs were a priority for Federal Government because they were the engine of growth for the economy and accounted for almost half of national income and three quarters of jobs.

“Given our determination to support our countrymen and women who run small businesses, we have held MSME Clinics in at least 28 states.

“The MSME clinic is an opportunity for small businesses to meet with regulatory agencies such as NAFDAC, CAC, SON, SMEDAN, BOI among others.

“In the course of running the clinics, we noticed that in addition to their requests for a friendlier regulatory environment, MSMEs also wanted to be supported in terms of production facilities which were lacking or costly.

“This is how we came up with the idea of supporting MSMEs by providing at least one Shared Facility in every state of the federation.’’

According to him, a shared facility is a place where the government provides various equipment and machines for a particular type of trade.

He said that the machines were usually very expensive industrial type machines and equipment.

“The idea is that such people can then have access to the use of the machines and equipment in that facility.

“In this way, government assists many people involved in the same trade with machines and equipment that they would not have been able to buy themselves.

“To do this, the Federal Government, partners with interested states, the Bank of Industry, NEXIM Bank, and the private sector.

“ And the particular trade or business to be supported is chosen in collaboration with the state government and relevant MSME stakeholders.’’

The vice president said that in 2021 alone, work had commenced on the development 10 facilities across various states to compliment those previously commissioned in Anambra, Benue and Lagos States.

“This facility that we just inaugurated is the fourth to be commissioned in the country.

“It is a well equipped facility for shared use for the production of various types of garment wares and clothing items.

“A one-stop garment production centre for the end-to-end production of various types of clothing items.

“The facility comprises about 200 world class both manual and fully automated fashion equipment and when used to full capacity, it will service 350 MSMEs daily and 110,000 each year.

“ It will enable fashion businesses within the Owerri metropolis and environs to carry out the following tailoring activities- Straight Sewing, Weaving, Hemmimg, Embroidery, Monogramming, Screen Printing, and Heat.

“It will Improve the quality of locally made clothing items, improve household income for local tailors, create jobs and create access to high quality and modern machines.

“ It will also Improve contribution of local tailors to revenue for the local, states and Federal Government.”

He said that such partnership was an excellent example of the way a state government should work jointly with the Federal Government to benefit the people of the state as federal resources belong to all Nigerians.

At the shared facility, the vice president had inspected the equipment therein; he also made an exhibition tour at the the MSMEs Clinic held at Ahiajoku Convention Centre, Owerri.

Earlier in his address, Gov. Hope Uzodinma, said that the inauguration of the Fashion Shared Facility for MSMEs was a salutary signpost for the shared prosperity agenda of the administration.

“This is why I can never thank President Muhammadu Buhari and his team enough for the creative enterprise expressed in this MSMEs Scheme.

“We sincerely appreciate the Federal Government for always being there for Imo State,’’ he said.

The governor also lauded the vice president for unveiling the MSMEs Clinic in the state.

In her remarks, Amb. Maryam Katagum, the Minister of State for Industry, Trade and Investment, said that the MSMEs Clinics, had since inception in 2017, served as an auspicious forum for increasing government relationship with key stakeholders in the MSMEs sector.

“This laudable initiative was purposely designed to reduce bottlenecks and provide practical and immediate responses to challenges faced by businesses,’’ she said.