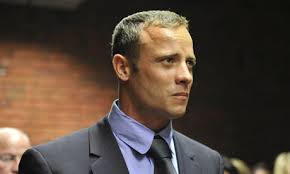 Amputee South African sprinter, Oscar Pistorius has been sentenced to five-years imprisonment in a celebrated case that catch world attention.

Pistorius was found guilty of culpable homicide for negligent killing of his girlfriend, Reeva Steenkamp, early this year.

The prosecution counsel had argued that Pistorius be sentenced to 10years jail, saying, he cannot be a “victim” as argued by the defence counsel, but rather that, “he caused tragedy.”

The defence counsel had argued for non-sentence punishment such as community service.

Presiding judge, Thokozi Masipa, said loss of live cannot be reversed, adding that, a long sentence would have been inappropriate and lack mercy and that the court decision is meant to serve justice bearing in mind the need to assuage the pain of the family of the bereaved.

She therefore sentenced the accused to five-years imprisonment.