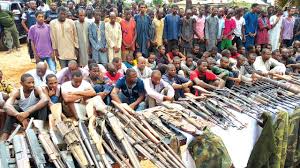 The suspects, including two women, were arrested from various hideouts in Nasarawa and Toto Local Government areas of the state.

Commissioner of Police, Bola Longe, while parading the suspects at the command’s headquarters on Monday in Lafia, attributed the feat to the efforts of “Operation Puff Adder,” an initiative of the Inspector General of Police tasked with curbing the menace of violent crimes.

Agency reports said personnel of the command under the special “Operation Puff Adder,” raided the kidnappers’ hideouts at Mararaban-Udege, Odu hills and Gidan Kwano in Nasarawa Local Government on May 18 and May 21, where they arrested 23 suspects.

Similar raid was carried out on a hideout at Kenyehu Village in Toto local government area of the state paid off with the arrest of 39 suspects from their alleged “planning theatre”.

Mr. Longe explained that the two female suspects were discovered to be caterers, allegedly cooking for the suspects and their victims.

He also said that 19 suspected cultists were arrested from Mararaba, Ado and Masaka axis of Karu local government area of the state and had been charged to court.

Mr. Longe added that the effectiveness of the Operation Puff Adder led to the arrest of the kingpin of an armed robbery gang that ambushed and killed two mobile police personnel on patrol in Tunga Village, Awe local government area of the state, on April 17, 2018.

He said that the suspect had fled the state after the alleged attack and had been on Police wanted list before his arrest upon return lately.

He said that items recovered from the suspects included 11 firearms, 115 rounds of live ammunition, two vehicles and one motorcycle.

The Police Commissioner said that investigation was ongoing to arrest other suspects still at large, adding that all the suspects would soon be charged to court.

He, however, called for the support of the people through credible information, noting that the Police could not handle the issue of security alone.

Nasarawa Police Command had on May 20, during the inauguration of “Operation Puff Adder”, paraded 14 suspected kidnappers from the same Nasarawa local government of the state.