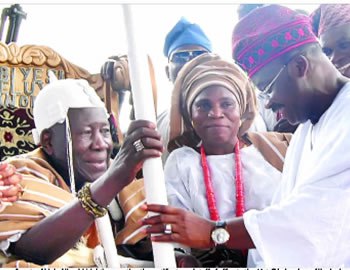 By Dipo Awojobi – Mapo, a location at the heart of Ibadan, the Oyo State capital, was a mecca, on Friday, as it was besieged by sons and daughters of the ancient city and hosted virtually all rulers in Yorubaland, civil and traditional at the coronation of the new Olubadan of Ibadan, Oba Saliu Akanmu Adetunji.

The traditional rulers, who included the Ooni of Ife, Oba Adeyeye Enitan Ogunwusi Ojaja II; the Alaafin of Oyo, Oba Lamidi Olayiwola Adeyemi III; the Sultan of Sokoto, Alhaji Muhammad Sa’ad Abubakar III; the Oba of Lagos, Oba Rilwan Akiolu and the Alake of Egbaland, Oba Adedotun Aremu Gbadebo III, were on hand to watch the Oyo State governor, Senator Abiola Ajimobi, swell their rank, again, by presenting the instruments of office to Oba Saliu Akanmu Adetunji, Aje Ogungunniso I and effectively installing him as the 41st Olubadan of Ibadanland.

Presiding over the coronation, Governor Ajimobi, who was flanked by nearly all his counterparts in the South-West states like Governors Ibikunle Amosun (Ogun); Rauf Aregbesola (Osun); Akinwunmi Ambode (Lagos) and Ayodele Fayose (Ekiti), described the event as unprecedented in the history of Ibadan, given the presence of the crème de la crème of the society from far and near and the attendant glamour.

He described Oba Adetunji, who hails from the Balogun chieftaincy line, as being fortunate to attain the position of the Olubadan, having waited in line for 40 years, since 1976, when he became Mogaji.

The Governor noted that the choice of Oba Adetunji was customary, traditional and legal without any legal encumbrance.

While commending the Ibadan traditional system as worthy of emulation, he announced the intention of the state government to “review the status of our obas and chiefs with a view to insulating them from partisan politics.”

“The present administration under my leadership is set to review the chieftaincy declaration of some titles and as the Chiefs Law Cap 28 Volume 1 OYSLN 2000 is meant to enhance the dignity and respect of our royal fathers.

“We are set to be a model to others, and to this end, we will carry out a complete overhaul of the institution of chieftaincy in this state with a view to ensuring speedy conclusion of appointment to chieftaincy titles based on the true custom of our people.

“We will also review the status of obas and chiefs with a view to also insulating them from partisan politics, more so that they are expected to be the father of all,” he said.