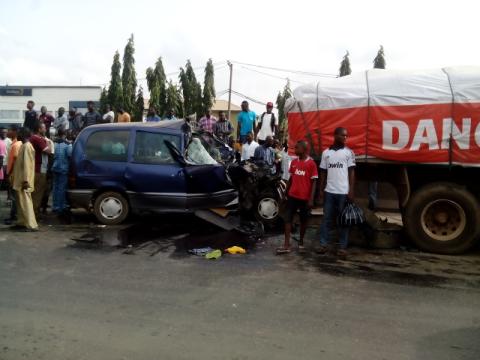 (LAGOS)By Dipo Awojobi – An unidentified woman was feared killed, Thursday when a Nissan Serena car which she was driving rammed into a stationary articulated vehicle belonging to Dangote Cement. 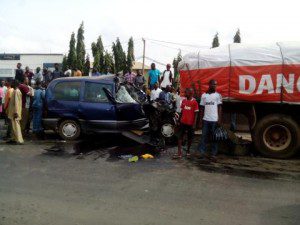 The car with registration number Ktu 166 CX, rammed into the Dangote Truck at the early morning.

Eye witness account said, the woman-driver, was the only occupant of the car and she died on the spot.

“The accident occurred at dawn, the car was on a high speed when it lost control and rammed into this stationary truck which was fully loaded with bags of cement,” the witness said.

Scores of sympathisers, who had gathered at the scene of the accident, heaped blames on the driver and owners of the truck, who they said abandoned the vehicle on the road for over 24hours without leaving any sign or indication such as the “C-Caution” sign to warn drivers about the truck.

A careful observation of the articulated truck, showed that its registration number had been deliberately removed, but various inscriptions such as XA-298-WNNÂ and ICT-3C-020 were seen written on it, while a large piece of canvass with the name Dangote Cement 3X had been used to conceal the bags of cement it was carrying.

Aside blaming the owners of the truck, sympathisers also blamed officers of the Lagos State Traffic Management Authority (LASTMA), who they accused of not doing much to evacuate the truck and the load it was carrying after over 24 hours until it eventually claimed a life.

Some were even of the notion that LASTMA officers, who are empowered by law to rid the roads of broken down vehicles, failed to tow the articulated vehicle just because it belonged to a famous company like Dangote Cement, saying that were it to be any other truck, traffic officers would have wasted no time towing it away.

“Why would they wait for this to happen before the right thing would be done. Even if the woman in question was speeding, without the truck being left on the road, this kind of an accident would not have happened,” an eyewitness was heard saying.

The sad incident was discussed in various groups including in public buses, where a driver was heard saying, “When a Dangote Truck breaks down, it would be left unattended to for days, and this is often to the detriment of other road users,” the driver said.

As at the time we got to the scene, a female head scarf was seen lying on the floor while some blood which had mixed with petrol was also seen flowing from the car unto the tarred road.

Though the driver had been taken away as at the time we got to the scene, eyewitness said that what appeared to be the lifeless body of a woman was pulled from the wrekage of the car, which had to be cut open for this to be achieved.

None of the police officers, who numbered about 15, was ready to speak on the incident as those accosted insisted that they were not authorised to comment on the incident