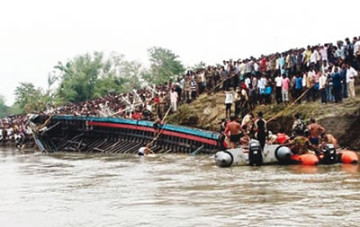 One person has been confirmed dead in a boat mishap which occurred on Monday at Ibasa operational area of Inland waterway in Lagos.

The Public Relations Officer of the National Emergency Agency, NEMA, Mr. Ibrahim Farinloye who confirmed the incident, said ten people were on board the boat when the tragedy occurred.

“The incident happened between Ojo and Tin Can Island, while the passengers were on their way to Coconut Island,” NEMA said.

According to NEMA, “there were four bigger boats passing, leading to a strong wave from the sea which destabilised the boat, but as the operator was struggling to stabilize the boat, the panicky passengers began to struggle causing the boat to capsize.”

The body of the dead is yet to be recovered, even as search continues for missing persons.

Politics Ibrahim Imam - December 9, 2022
0
(News investigators) A witness, Shamsudeen Bada, on Thursday narrated at the Kwara State High Court in Ilorin how men of the Intelligence...