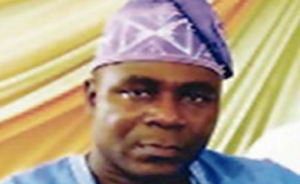 The Speaker of the Ondo State House of Assembly, Rt. Hon. Samuel Adesina Ajayi, is dead.

A statement by the Secretary to the State Government, Dr. Rotimi Adelola, said the death occurred in the course of a protracted battle with Cancer of the Urinary Bladder.

He died Monday night at an undisclosed hospital in Lagos.

The  late speaker who has been absent from the state parliament for over six months was described as a bridge builder, a man of integrity and reliable team player who placed the interest of the state above personal consideration.

“The Ondo state government received the news of the death of the Speaker of the State House of Assembly, Honourable Adesina Samuel Ajayi with disbelief but in total submission to the will of God. All hopes were that the late Speaker will pull through his health challenge which has seen him taking time off official function for some time. That death took him at this time can be no less of a shock to the government and people of the State, as the prayers of all was for full recovery,” Adelola said.

The statement Government commiserates with the immediate family of the late Speaker, his colleagues in the state legislature, members of his constituency in Odigbo Local Government Area of the State and indeed the entire people of the state on the sad loss.

“We mourn his passage and can only pray for fortitude and strength from above to bear this irreparable loss,” the statement added.