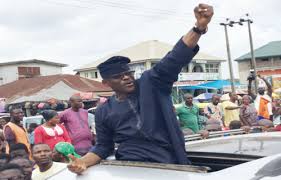 By Dipo Awojobi – The Appeal Court sitting in Abuja, Wednesday nullified the ruling of a Federal High Court on which recognised businessman Jimoh Ibrahim as the candidate of the Peoples Democratic Party (PDP) for the November 26 election, even as it ordered the return of Eyitayo Jegede as the authentic candidate for the election.

The three-member appeal panel led by Justice Ibrahim Salauwa shred the October 14 judgement of Justice Okon Abang, describing it as “most fraudulent and highly misplaced judgement.”

The ruling followed the order on Tuesday by Acting Chief Justice of Nigeria (CJN), Justice Samuel Walter Nkanu Onnoghen, for the Abuja division of the Court of Appeal to proceed with the hearing of appeals in all applications concerning the PDP leadership and the PDP Ondo State crises.

“The entire ruling of the 14th of October is a nullity. It is hereby set aside. Everything that was done at the lower court is a fraud,” the court said

The court also set aside the June 29 judgement which confer legitimacy on the Ali Modu Sheriff faction as the recognized leadership of PDP.

“It is a gross abuse of section 36 (1) of the constitution, particularly the right to fair hearing,” the court said.

“We set aside the highly misplaced; most fraudulent judgement on June 29,” it added.

The Appeal court case against Jimoh Ibrahim was filled by PDP stalwarts including Jegede, former Minister of Agriculture, Prof. Jerry Gana among others.

The Wednesday ruling followed the Supreme court verdict Tuesday, which ordered the appellate court to deliver judgement on all the appeals before it.

Meanwhile, the Ahmed Makarfi-led faction has commended the Court of Appeal for its judgment.

The party, in a statement by its National Publicity Secretary, Dayo Adeyeye, said the judgment was proof that what transpired at the lower court was miscarriage of justice.

The PDP hailed the Nigerian judiciary for “standing behind truth as it affects the attempt by enemies within working in consonance with some jittery and desperate opposition members.’’

According to the Makarfi led PDP faction, the judgments delivered by the Supreme Court and that of the Court of Appeal had rekindled the hope of the common man in the judiciary.

“This shows that justice might be delayed, but will surely come provided the oppressed refuse to give up on his rights.

The statement said, “the judgment delivered by the Justice Salauwa-led Appeal Court Panel which returned the validly elected candidate of our party, to his rightful place was expected.

“It was expected because we were sure that the travesty of justice carried out at the lower court will in any sane society, not stand the test of time.’’

“It is gratifying to note that all the seven issues before the Appeal panel as relates to the illegal substitution of the factions’ candidate, were decided in favour of Mr. Jegede.

“This goes to prove that what transpired at the lower court was a miscarriage of justice.”

It expressed “hope that the Independent National Electoral Commission (INEC) would toe the line of the Court of Appeal by postponing the Saturday election by a minimum of two weeks.