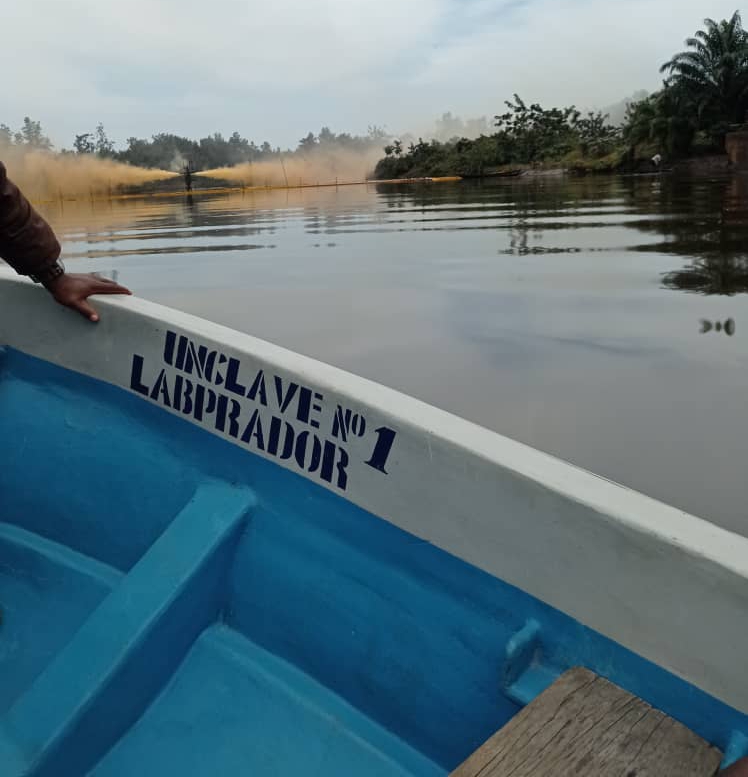 News Investigators/ The people of Nembe Basamri in Bayelsa on Thursday expressed concerns over the air toxicity following prolonged exposure to gas and crude oil leaks from a nearby oil well operated by Aiteo Eastern Exploration Company.

The News Agency of Nigeria (NAN) recalls that the oil firm had reported a leak from an oil well at its Santa Barbra South field within Oil Mining Lease (OML) 29 on Nov. 5 but community sources claimed that the leak was noticed on Nov 1.

Residents at fishing settlements along the Nembe creeks have been living with the gas and crude discharge which has paralysed economic activities in the predominantly fishing area for the past two weeks.

A community leader in Opu-Nembe, Nimibofa Devi, who spoke in a telephone chat with NAN, said the people in the impacted arrears were worried over the air quality in the area and alleged that they were having respiratory challenges.

He further alleged that a four-year-old toddler developed complications following complaints of stomach upset and difficulties in breathing and was being taken to a health centre at Opu-Nembe when she died.

“With the girl’s death, suspected to have been as a result of methane gas poisoning, we have expressed worries to our king that if nothing is done urgently, more deaths will be imminent.

“As a biochemist, I know how toxic methane gas can be and we call for an emergency air quality audit to ascertain the toxicity levels in the impacted communities.

“If not for the resilience and robust immunity of the rural people, more residents would have developed severe complications.

“The result of the air quality tests would go a long way to determine if evacuating the people is necessary.

“The oil well in question is a gas well with about 80 per cent gas and 20 per cent crude reserve, and the ongoing response by more than 50 oil workers is on oil recovery while the toxic gas escapes into the atmosphere,” Degi said.

Reacting to a statement issued by spokesman of Aiteo, Mathew Ndianabasi, which claimed that the oil firm suspected oil theft and sabotage, Mr Degi dismissed the claim as “a reckless prejudice“.

“It is just a ploy to evade liability for the obvious neglect. It is a known fact that the well is non-producing and the area has salt water while the wellhead casing is made of steel which is prone to corrosion.

“Rather than look inwards at their safety procedures for such high pressure wells they are pointing accusing fingers at innocent people. The surveillance worker who noticed and reported the leak is being hunted by the security agencies.

“We will resist every attempt to pre-determine the cause of this disaster even when the investigation has yet to commence. Every alliance between the operator and their surveillance contractors to divert attention from safety processes will fail.

“We have evidence that when the leak was reported earlier on about Nov. 1, rather than use appropriate sealants, they used clothes to block the crack. We will give the evidence during the joint investigation and the truth will prevail,” Mr Degi said.

Meanwhile, the National Oil Spills Detection and Response Agency says it has authorised the deployment of oil spill response team from other oil firms in the country to assist, so as to mitigate the impact on the environment.

Director-General of National Oil Spill Detection and Response Agency, Idris Musa, who had told NAN that personnel deployed to investigate the incident could not commence work until the leak was plugged, noted that the leak was still ongoing.