By Dipo Awojobi – The Olubadan-designate, High Chief Saliu Adetunji, has confirmed March 4 as the date set aside for his coronation as Olubadan of Ibadanland. 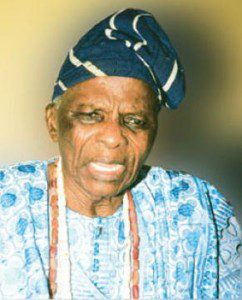 This was contained in a statement signed by Adetunji’s media aide, Adeola Oloko, and made available to newsmen on Sunday in Ibadan.

Adetunji , according to the statement, confirmed the coronation date during the visit of leading musician, Chief Ebenezer Obey, to his Popoyemoja, Ibadan, residence on Saturday.

He noted that the date was arrived at after extensive consultations with stakeholders.

The Olubadan-designate said the coronation was delayed due to the burial ceremony for the late Olubadan, Oba Samuel Odulana, who he said deserved such a befitting burial.

He said the coronation would take place at Oja’Ba, Ibadan, where his predecessors received their staff of office

Adetunji, however, said the venue of the reception billed for Saturday, March 5, would be announced later.

Earlier, Obey had described Adetunji as a dependable and reliable pillar in music recording, composition, promotion, advertisement and marketing.

He said nothing would be too much for any musician to do to ensure the success of the Olubadan’s coronation.

Obey prayed for continued peace, progress and development in Ibadanland under the new monarch.