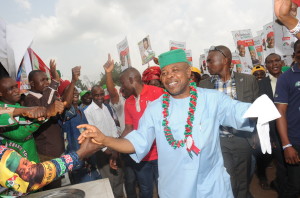 Also, immediate past governor of Anambra State, Peter Obi and erstwhile governorship aspirant in Imo State, Hon. Bethel Amadi are among top politicians that rallied support for the Peoples Democratic Party (PDP) candidate, Rt. Hon. Emeka Ihedioha in the quest to become the next governor.

Ohakim addressed the press in Owerri, Sunday where he backed down on his aspiration and offered to line up behind Ihedioha in the bid to flush out the Rochas Okorocha Government from Imo state.

Obi and Amadi spoke during the governorship rallies at Mbaitoli and Ikeduru Local Government Areas over the weekend where a tumultuous crowd caused a huge traffic stretch over several miles as thousands of party faithfuls walked long distances to be part of the events.

At Mbaitoli where canon shots and huge shouts of joy heralded Ihedioha’s entry into the campaign venue, Peter Obi advised Imo electorate to identify themselves with the re-election project of President Goodluck Jonathan as well as Ihedioha as Imo State Governor.

The former Anambra governor lambasted Imo State Governor, Owelle Rochas Okorocha for his failure to uplift the living standard of the people and for being hostile to President Jonathan. He said that every responsible governor will always be in the good books of the President and not to work against him. He therefore urged Imolites to reciprocate the good gestures of Mr. President by voting his party PDP to power at all levels, adding that Imo should be reconnected to the national political grid once again. According to him, Ihedioha is the chosen one to salvage Imo State and bring back its last glory.

At Ikeduru LGA, one of the frontline guber aspirants and President of the Pan African Parliament, Hon. Bethel Amadi stormed the Iho, campaign ground with his supporters to declare support for Ihedioha.

Amadi embraced the Deputy Speaker to the admiration and cheers by the crowd and declared his total support and commitment towards the realisation of the governorship project.

He maintained that Imo PDP is now stronger and more united adding that Hon. Ihedioha is now the chosen one to lead the state to greater heights.

The jubilant Ihedioha, thanked Hon. Amadi for his support and reception for his entourage and assured that he will work closely with him towards making Imo State a model state.