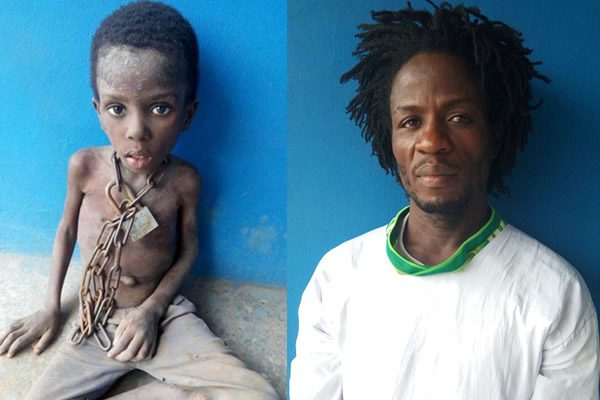 By Dipo Awojobi – The Ogun State Police Command has handed over nine-year-old, Korede Taiwo, who was chained and starved by his father, Francis Taiwo, to the Ogun State Government.

The boy was rescued on Friday by operatives of the Nigeria Security and Civil Defence Corps and the Ogun State Police Command.

Korede, who was brought to the Zone 2 Area Command, Oke Ilewo, Abeokuta, by a police team led by the state Police Public Relations Officer, Muyiwa Adejobi, was later handed over to officials of the state Ministry of Women Affairs and Social Development.

He was handed over to the Director of Social Welfare Services in the ministry, Mr. Shotubo  Olumide, by the Officer-in-Charge of Anti-Human Trafficking of the command, Oluwatoyosi Bello, a Superintendent of Police.

Korede’s father and his stepmother, Kehinde, were present at the command, but were not allowed to witness the ceremony.

Francis, who is the pastor in charge of the Celestial Church of Christ, Key of Joy parish, Ajibawo, in the Ado Odo/Ota Local Government Area of the state, was arrested on Sunday.

Shortly before the event, Adejobi said after the rescue, Korede insisted that he did not want to go back to his father’s house.

Adejobi, a Superintendent of Police, said the wife of the state governor, Mrs. Olufunso Amosun, had indicated interest in taking care of the boy.

The police spokesman said the Assistant Inspector-General of Police in charge of Zone 2, Abdulmajid Ali, had ordered a thorough investigation into the matter, adding that the suspects would be charged to court.

Adejobi said, “It is a terrible case. Apart from being criminal, it is inhuman. The command condemns the act in totality. The AIG has directed that the matter be thoroughly investigated.

“We want to assure members of the public that the case will be used to serve as a deterrent to those who abuse children.”

Korede’s father, however, said he regretted his action and begged for forgiveness.

He said, “I didn’t know there is punishment for my action, but now I know, I regret it. I want forgiveness from the government.”

Korede’s stepmother also pleaded with the government to forgive her and the husband.

She said “We did not know the implication; that was the reason we chained him. We want   the government to forgive us.”