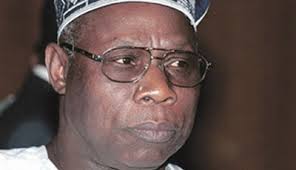 The former President announced his decision at a press briefing on Monday in the presence of the Ward Chairman of PDP at his Hilltop Residence in Abeokuta, Ogun state.

In a dramatic speech made to some of his party men, Obasanjo said he has decided to relief himself of the burden of carrying the membership card of PDP.

Obasanjo who handed his membership card to the ward Chairman watched as the card was torn to shred.

He said, he would like to remain as a statesman so as to e able to take position on issues without the encumbrance of his membership of the ruling party.

The ex-president had last week in Nairobi, Kenya declared his support for the opposition APC Presidential candidate, General Muhammadu Buhari.

For some time now, the former president has been critical of the President Goodluck Jonathan-led administration, the latest being last Saturday when he accused Jonathan of plotting to remain in power if he losses in the March 28 presidential elections, like former Ivorian President, Laurent Gbabgo as well as installing an interim government.

He also accused the military of being used by Jonathan to force the Independent National Electoral Commission to postpone the elections earlier scheduled for February 14, 2015.

The accusation drew spontaneous attacks from the PDP and President Jonathan’s aides.

Meanwhile, the Ogun State chapter of the PDP in an apparent showing of disgust to Obasanjo’s action has expelled him from the party.

The expulsion came some hours after his (Obasanjo) announcement.