(LAGOS)The traditional ruler of Lagos, Oba Rilwan Akiolu has gone wild over his support for the All Progressives Congress (APC) gubernatorial candidate in Lagos State, Akinwunmi Ambode as the next governor of Lagos State. 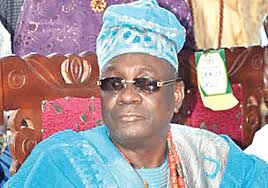 Sources at the Oba’s palace told our reporter that Oba Akiolu has gone practically wild, mincing no words about his preference for Ambode, while placing curses on anybody that is seen as opposing the APC gubernatorial candidate.

”Last week, Oba Akiolu received some prominent indigenes of Lagos and politicians in his palace where he started raining curses and abuses on anybody that does not support Ambode. He said any family that is against Ambode in Lagos will perish and will never be prosperous.

”What came out from Oba Akiolu’s mouth shocked a lot of people, because he is supposed to be father to everybody in Lagos. A lot of people there were angry with Oba Akiolu because he has no reason to place curses on anybody that is not in support of his candidate”. Our source stated.

Meanwhile, we gathered that some top APC politicians in Lagos are already withdrawing their supports for Akinwunmi Ambode over what they described as the overzealousness and domineering posture of Oba Akiolu.

”Oba Akiolu can not push us like children. We have a mind of our own and if Ambode needs us, he will come and sell himself to us. Not for any Oba that doesn’t have any constitutional role to play in Lagos politics be placing curses on his subjects. This is the same Oba Akiolu that couldn’t secure a House of Representatives ticket for his son at the APC primaries.

“Oba Akiolu’s son was disgraced at the APC House of Rep. primaries. So, he should not destroy Ambode’s chances with his unguided utterances.”A top APC politician informed us.

On the other hand, we were told that the APC National Leader and former Lagos State governor, Asiwaju Ahmed Tinubu is not happy with the utterances of the Lagos monarch, ”Asiwaju Bola Ahmed Tinubu is not part of it. He will definitely call Kabiyesi to order. You can not coerce people to vote for Ambode, we must appeal to them”. One of Tinubu’s aides told us yesterday.

It would be recalled that Oba Rilwan Akiolu had publicly threw his support for Ambode as Governor Babatunde Raji Fashola’s successor during a book launch earlier in May, 2014. Oba Akiolu was quoted to to have said “

“You people know me well that I don’t hide my feelings on where I stand on issues. We the royal fathers have consulted widely within the state with the sons and daughters of Lagos and have come to the conclusion that the best person to take over from Mr Babatunde Fashola, the iconic governor of Lagos State is Mr Akinwunmi Ambode.

”We can not have a man like this and allow somebody whose father is an Oba in Ewekoro, Ogun State to be our next governor in Lagos State. Although, Lagos State belongs to every Nigerian to actualise the Nigerian dream, Ambode remains the best man with the required pedigree and character to take Lagos State to the next level”.

”The APC can go ahead with their primaries, but the elders of the State have met and agreed that Ambode shall be the next governor of Lagos State”.

Oba Akiolu’s statement sparked outraged in Lagos as most of the aspirants and political analysts lampooned him for being too political.

However, the APC gubernatorial primary was held last month and Akinwunmi Ambode emerged the APC candidate for the 2015 governorship election.