By Nuel Suji – Speaker of the House of Representatives, Yakubu Dogara, says the northeast region is behind in all human development indices, urging stakeholders from the geo-political zone not to mismanage the newly created North East Development Commission.

Mr. Dogara who noted that businesses, factories and schools have been destroyed also observed the only productive enterprise in the zone is Ashaka Cement.

The Speaker urged the people of the region to justify the trust reposed in them by the President and members of the National Assembly from the rest of the country who unanimously supported the passage of the NEDC bill in the two chambers. 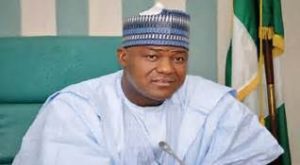 Speaking when he received a delegation from Bama Emirate Council, Borno State, led by his royal highness, the Shehu of Bama, Alhaji Shehu Kyari Umar Ibn Ibrahim El-Kanemi, which paid him a visit in his office, he said that the North East has suffered devastation that will take decades to rebuild, hence the need for a precise and confirmed law that can provide the legal backing for its recovery.

The Speaker also used the occasion to reaffirm his earlier position that the NEDC will not be mismanaged, even as he urged all elders and stakeholders to unite in ensuring that the objective of the NEDC Act is fully achieved.

He also advised that while celebration is ongoing for the signing into law by President Buhari, there should be a consciousness among everyone in the region that its purpose cannot be abused so as not to break the trust that Nigerians, through their representatives in the House and Senate, reposed on them by approving the passage of the Act.

Mr. Dogara explained the rationale behind the creation of the North East Development Commission (NEDC), saying the decision was reached after careful consideration on the best tool to employ for the long run rehabilitation, reconstruction and rebuilding of the North East region.

He explained that the decision to make a law was chosen as the best since it can outlive any administration, unlike in the case of policies or other similar adhoc interventions.

“As true leaders and representatives of the zone, our true focus has been what we can do in order to ensure that we build on the successes that this government is recording in its fight against terrorism and ultimately to ensure that we do not have a relapse in that zone with this kind of situation we have found ourselves.

“The region is behind in all human development indices and businesses, factories, schools have been destroyed. I think as we speak, perhaps the only productive enterprise that we have in the north east is Ashaka Cement.

“So from day one when we started meeting, our thinking was how we can ensure that whatever policies are developed by government aimed at tackling the myriad of challenges facing us as a zone are those that will survive whoever is President now. It became clear to us that if we leave everything at the level of policy, granted that we have a President now that support and loves our people, he will not continue to be there forever.

“But the truth is that the level of devastation occasioned by this insurgency is such that it is going to take us decades to recover from. If you were to quantify the infrastructure, wealth and everything that we have lost, we will be talking about trillions. So you can imagine in terms of national budget, where are we going to get these trillions to channel to the north east? In the next 10, 20 years it is not possible. So even to recover what we have lost, we are talking about decades, not even years.

“So that is why as skillful legislators, we decided that we will go for NEDC. A lot of people thought it was not necessary, some even thought we wanted to create a pool, like an oasis of prosperity in the desert so that some few privileged sons and daughters in the region can just mismanage the resources.

“If these interventions are left at the level of policies, any subsequent government that comes that doesn’t love our people that much will with a stroke of pen just strike out the policy and that is the end. So, the thinking was if we take this to the level of a law, then any future government that seeks to reverse this will have to first come and lobby members of the National Assembly for them to repeal that law.”

This is just as he commended President Muhammadu Buhari and the wife of the president, Hajiya Aisha Buhari, for supporting the coming to being of the NEDC.

“Let me also thank Mr President that the efforts of this current government, including the security agencies, for the very extraordinary sacrifices they put in place in order to ensure some sanity in our region.

“We have witnessed progress. Some have said Boko Haram has been degraded, some have said they have been decapitated, some have even considered that they have been defeated but whatever the situation is, the most important thing is for our people to go back to where they were and for them to have hope that in the environment God has given us, they can continue to contend for the best things of life. That is what is important. The debate shouldn’t be about the degrading or decapitating of Boko Haram, but the survivors, the IDPs and in building these communities, homes that were shattered on account of terrorism.

“We must also not forget the role of the First Lady. Members who are here will remember that when we had the public hearing for the Bill, she personally led wives of governors to come and witness that hearing.”

Dogara also informed the delegation that a reoccurrence of what happened in the past should be avoided at all cost, as the signs that fuelled the terrorism were there but were ignored by the stakeholders.

“The signs were there, it’s just that we didn’t notice it on time. For years in this country, the North East has always come last in terms of budgetary allocation, in spite of the fact that we face more challenges than other zones and when it comes to human development indices we are almost the last. Not even almost, we are the last in the country.

“But we didn’t pay attention. When population curve was going up sharply and opportunity curve was nosediving, we didn’t pay attention. I don’t know the correlation between violence and poverty but I’ve seen that in societies where hope abounds, it is always easier to tame the incidence of violence but where you find extreme poverty, the likelihood of violence is always there and I guess that was where we missed it.”

He thanked the delegation for the visit and encouraged them to keep persevering, praying that soon they will be able to return to their domain.

“Hope is returning, let’s continue to support the government and security agencies,” he added.

Earlier, His Royal Highness, Shehu El-Kanemi, described the Speaker as a “dynamic political leader of the North East,” expressing great appreciation to the Speaker for the support and dedication given to the quest for the rehabilitation, reintegration and reconstruction of the north east and it’s people.