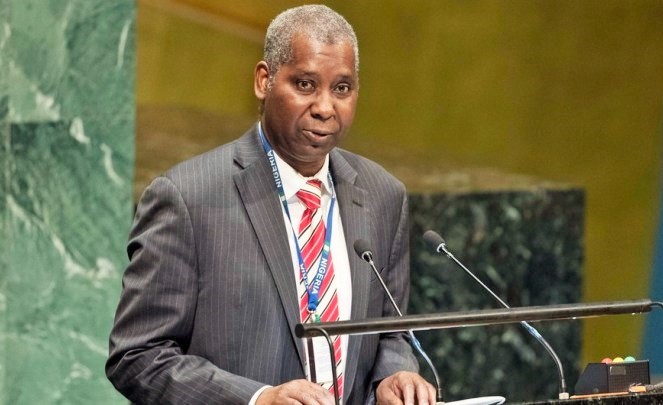 (News Investigators)/ Nigeria’s Permanent Representative to the United Nations, Tijjani Muhammad-Bande, has been elected to head the UN General Assembly.

Mr. Muhammed-Bande who was the Vice-President of the General Assembly during 71st session in 2016, succeeds Ecuador’s Maria Fernanda Espinosa, following his election by acclamation at the 87th plenary meeting in New York on Tuesday.

He is the second Nigerian to hold the office after Joseph Garba, a retired military officer and diplomat, who led the organ between 1989 and 1990.

Mrs Espinosa, in a tweet shortly after the election extolled the virtues of the new UN GA President. “My sincere congratulations to HE Mr. Tijjani Muhammad-Bande #Nigeria, for his election as 74th #UNGA President. Amb. Tijjani brings with him an outstanding career both as scholar & diplomat. My team & I will be at your disposal to ensure the smoothest transition possible.”

Mr. Muhammad-Bande, in his remarks spoke about a number high-level events that would be convened at UN Headquarters in New York to support the Sustainable Development Agenda, in September.

“The promotion of human rights and the empowerment of women and youth deserve special attention, and I will be devoted to the promotion of gender parity throughout the whole UN system, starting from my own Office”, said the president-elect.

According to him, the 75th anniversary of the UN’s founding would be commemorated during his tenure, he called it “a unique opportunity for us to reduce the trust deficit between nations”.

To “achieve the visions of our founding fathers, we must ensure that indifference and cynicism does not creep into our Organization”, he asserted, saying that the 193-nation Assembly “must play its role in bridging the gaps and promoting collective action”.

He also highlighted that efforts must be maintained to strengthen the relationship between the General Assembly, Security Council and Economic and Social Council.

“I will count on the support and solidarity of all Member States as well as the Secretariat”, he maintained, saying that he would use his office’s advocacy tools to promote multilateral approaches for “workable solutions” to pressing issues. “I will work with Member States on streamlining our work and improving the way we do business at the UN”, he added.

Noting the growing number of events, which may risk undermining genuine dialogue and over-stretching delegations, he assured “I will work with you all on appropriate solutions, as I believe we must make the UN more efficient, effective and accountable to the people we serve”.

In his remarks, Secretary General Antonio Guterres congratulated Mr. Muhammad-Bande and noted some of the “many important and admirable qualifications” he brings to the office.

He cited the president-elect’s tenure as Nigeria’s UN Ambassador; his expertise in political science and public administration; and the “invaluable insights” he has into Africa’s challenges and world affairs in general, particularly regarding the Organization’s peace and security work, sustainable development and human rights.

The UN chief said that “as we gear up to commemorate the 75th anniversary of the United Nations”, he hopes to use the occasion “to reaffirm the value of international cooperation and the vision of the Charter”.

Mr. Guterres also commended the current Assembly President, María Fernanda Espinosa for her “outstanding work”, saying “I am most grateful for her support for United Nations reform and her overall stewardship of this body”.

The Secretary-General concluded by offering the president-elect his support “as we strive to reach our shared goals and uphold universal values”.