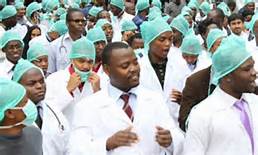 By Nuel Suji – The National Association of Resident Doctors (NARD) has commenced an indefinite strike over what it described as the failure of the federal government to meet its demands.

The doctors resolved to embark on the indefinite strike at its National Executive Council meeting, Monday in Abuja.

NARD, in the notice of the strike dated 4th September 2017, signed by Dr. Onyebueze John U and Aneke Emmanuel O.  President and General Secretary respectively, said it “rejected the memorandum of terms of settlement from Government on the items of her demand for strike action and resolved to proceed on the proposed National total and indefinite strike with effect from 8:00am Monday 4th of September 2017.”

NARD’s demands include the payment of the salary arrears of its members in federal and state health institutions and the upgrade of its members who have met the requisite criteria for promotion.

“Neither the federal nor state government has shown commitment to the resolution of issues at stake nor honoured previous agreements,” Olusegun Olaopa, president of NARD University College Hospital, Ibadan, had said in a statement.

“Consequent upon this, the association resolved to proceed on a total indefinite industrial action from Monday, September 4, 2017, until all these issues are permanently resolved.

“Nationwide pre-strike protests against this injustice are to hold in all our branches and states of the federation on August 30, 2017.

“All heads of tertiary health institutions who have received funding for payments to our members should be directed to pay same immediately.”

It would be recalled that two months ago, NARD had issued a warning to the government that it would embark on an indefinite strike if its demands were not met.

Similarly, the Academic Staff Union of Universities (ASUU) is currently on strike over the failure of the Government to meet its demands, which include the payment of the earned allowances of its members.

The government has however, commenced negotiation with ASUU with a promise to resume talk after the Sallah break.