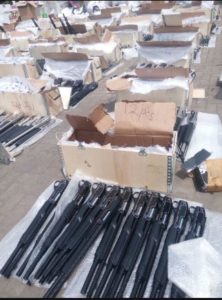 The Comptroller General of Customs, Hameed Ali disclosed this in Lagos on Monday while conducting journalists round during inspection of the seized items. 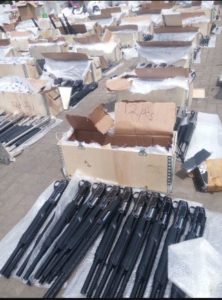 The Comptroller General said the boxes were concealed with steel and other merchandise goods to prevent easy detection.

“Government decided to prohibit the license of pump action and therefore the importation and transaction is totally against the law,” he said.

Adding that, “Such deadly contravention of the law is even more unacceptable considering the fragile security situation in some parts of the country.

“Investigation has already commenced and I have directed that the dragnet should be wide enough to fish out all persons involved in the importation and clearing of the consignment.

“Already three suspects have been arrested in connection with this illegal importation and the officers involved in the clearing of this container are with the comptroller under detention.”

He commended the servicemen for their vigilance, pointing out that the Customs has been transform to service “where most officers and men are on a daily basis ensuring that illegalities are not allowed unchecked.’’