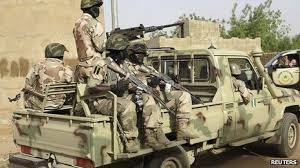 …Four Soldiers Killed In An Ambush.

By Sadiq Umar – Four Soldiers have been killed in an ambush by the Boko Haram insurgents, even as the Nigerian Army intercepted 14 suicide female suicide bombers in their attempt to unleash terror on the city of Maiduguri, the Borno State capital.

The attacks came four days after President Muhammadu Buhari said the insurgents have been defeated, and are now lacking capacity to attack.

At a media briefing by the Commander of Operation Lafiya Dole, Maj. Gen. Yushau Abubakar, in Mai‎duguri, Monday, the Army said three of the 14 terrorists blew themselves up while seven others were shot dead by soldiers.

“I believe this development has averted what would have been a major disaster if they had gained entrance into Maiduguri,” Abubakar said.

“One of the girls went into a nearby house and requested for water to perform ablution but instead prepared herself and came to a nearby mosque, killing herself and one other person while 13 others sustained injuries.”

According to Abubakar, “The 14 female suicide bombers, who were between the ages of 12 and 18, attempted to entered Maiduguri with the intent to cause mayhem, confusion, and panic.

The girls, he said had planned to carry out coordinated suicide missions through Asmari, Damboa checkpoint, Ali Dawari, Molai Kura, Baderi, and Jumari villages, before they were intercepted by soldiers on patrol.

He said three of the suicide bombers managed to escape while one was arrested, adding that the insurgents have been weakened, hence the change of tactics to soft target attack and ambush.

Abubakar said four soldiers were killed as the insurgents recently ambushed Nigerian troops in Mairaria village on the Maiduguri and Firgi road.

He added that 14 of the insurgents were also killed during the encounter with the soldiers.

Similarly, the Borno State Police Command on Monday confirmed the death of scores of people after bomb blast near a mosque in Silimanti, a suburb in Maiduguri.

According to the Police Public Relations Officer, Victor Isuku, unspecified number of casualty was recorded.

“I can confirm to you that the incident happened in the early hours of Monday,” Isuku told journalists on Monday in Maiduguri.

“But I cannot give you the casualty figures as aid workers are still counting.”