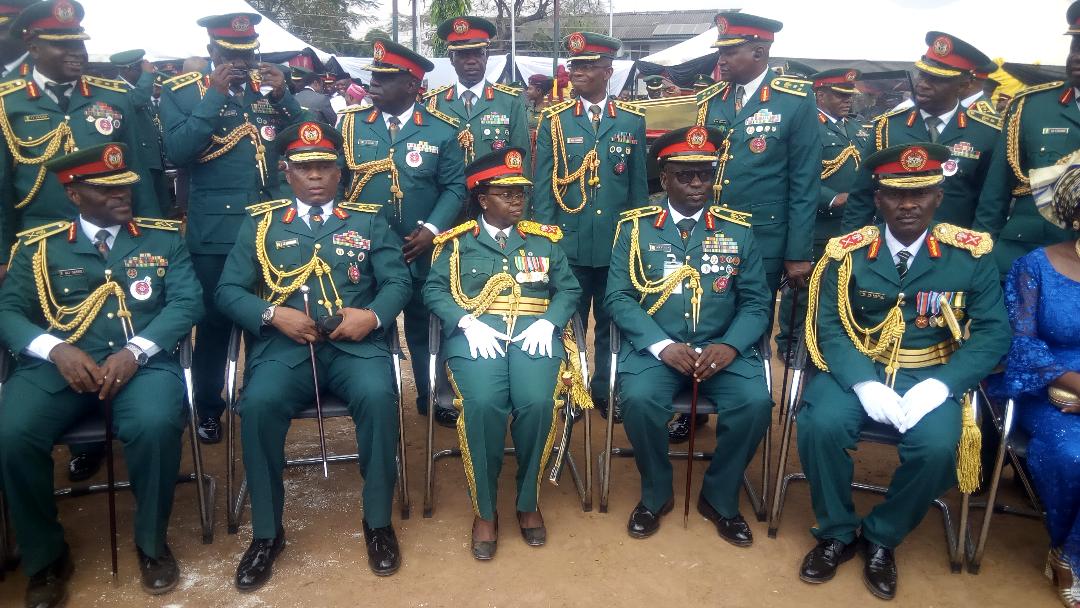 The decorated generals were among the 136 senior officers recently promoted to the rank of major general and brigadier general by the army authorities.

While congratulating the newly decorated generals, the Minister of Defence, Bashir Magashi, urged them to hold their heads high and remain responsive in the discharge of the constitutional duties.

Mr. Magashi, a retired major general, said the officers gained the promotion as reward for hard work, dedication and loyalty to the constituted authority.

He also urged them to see their new rank as a call to make more sacrifice in the defence of the country.

He said the Federal Government was committed to boosting the morale of the officers in terms of welfare and proper equipment.

“I urge you to justify the confidence reposed in you by working hard to rid the country of the prevailing security challenges,” he said.

The Chief of Army Staff, Tukur Buratai, urged the new generals to do their best in protecting the country within the confines of the constitution and rules of engagement.

He said their promotion was well-deserved, while warning that the authority would not tolerate any form of indiscipline and disloyalty.

Mr. Buratai, a lieutenant general, also warned them against hobnobbing with politicians and lobbying for appointments.

According to him, if they must lobby, they must lobby only the chief of army staff with hard work, discipline, excellence, loyalty and professionalism.

“I challenge you to maintain state of fitness and be ready to show fitness in leading your troops and also pay attention to the welfare of your subordinates.

“There is much work to be done and some of you are in the theatre of operation while some of you can also find yourselves there,” he said.

The Chief of Policy and Plans (Army), Lamidi Adeosun, urged the newly promoted generals to be firm in decision making and mentoring.

Mr. Adeosun, a lieutenant general, said that all 2-star generals were decision makers, adding that they must ensure that whatever advice they offer must be appropriate.

“You are all answers by the authority of the rank you are wearing and you cannot afford to make careless mistakes,” he said.

Mr. Adeosun urged the senior officers to pay attention to mentoring rather than godfatherism, adding that mentorship was seriously lacking in the system.

The Chief of Administration (Army), Usman Yakubu, said that Nigerian Army had ensured that only worthy and qualified officers and soldiers were elevated to higher ranks as and when due.

Mr. Yakubu, a major general, said that the officers were promoted based on their professional competence among other requirements.

He said that several officers of the rank of Brigadier General were presented before the board, adding that the board found the 39 officers worthy in character and competence.