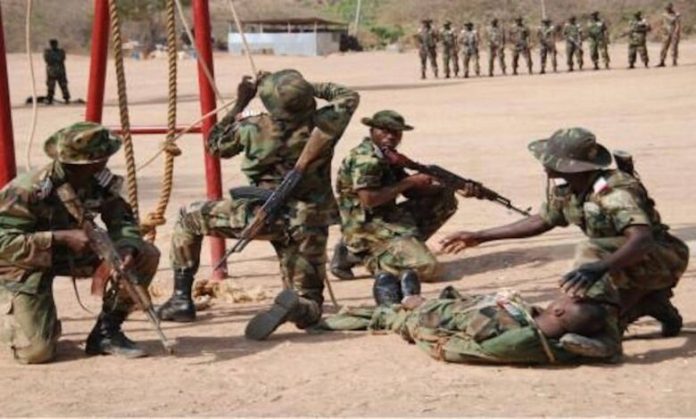 News Investigators/ The Chief of Army Staff (COAS), Farouk Yahaya, on Friday inaugurated the 37 Demonstration Battalion at the Nigerian Defence Academy (NDA) in Kaduna.
Speaking at the occasion, Mr Yahaya, a Lieutenant General, said the new battalion would help in demonstration of all aspects of training for cadets, as well as beefing up security in Kaduna State.
He said that the review and adjustment of order of battle for the Nigerian Army had become imperartive in view of the dynamics and unpredictable nature of contemporary threats to national security.
According to him, the inauguration of the battalion is a practical demonstration of the Nigerian Army’s commitment to enhancing national security and reinforcing capacity development efforts of the NDA.
He explained that utilisation of 37 NDA Demonstration Battalion would add value to training activities of NDA through conduct of mock drills designed to enable the cadets visualise specific tactics, techniques and procedures.
“This will ultimately contribute to improving the skills of the cadets,while ensuring realistic training consistent with global military practice,” he said.
The COAS noted that the establishment of the battalion under the operational command of 1 Divi. Nigerian Army,would enhance the security of Afaka general areas of Kaduna metropolis, as well as Kaduna State in general.
Yahaya implored the Commandant of NDA to ensure that the battalion became a model for the Nigerian Army, so that the cadets could see and appreciate a typical regimental unit in the field.
He urged the pioneer officers and soldiers of the newest unit in the Nigerian Army, to ensure being the best embryo of the unit by exhibiting resilience and adaptability.
Earlier, the Commandant of the Academy,Maj.-Gen. Ibrahim Yusuf, said NDA had been craving for Demonstration battalion for many years, as it had always been a demonstration company.
He therefore expressed delight that such a unit had been established during the tenure of the current Chief of Army Staff.
The News Agency of Nigeria (NAN) reports that the officers and soldiers of the Demonstration battalion were selected from Depot, Nigerian Army, and other units with outstanding operational experience in counter-insurgency operations.
The COAS also inaugurated the battalion’s officers mess and layed the foundation blocks for the construction of the units.