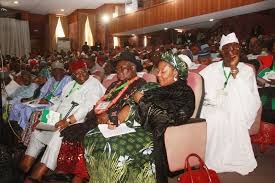 Delegate representing Christian Association of Nigeria (CAN), Mr. Tubosun Emmanuel, said at the ongoing National Conference in Abuja yesterday that not less than 25000 women became widows as result of sectarian crisis that engulfed Jos, Plateau state since 2009.

Emmanuel when given the floor to speak on the floor of the National Conference in an emotion-laden voice gave a vivid account of how a Church embarked on registration of widows in the state since the commencement of the crisis. He however did not talk about the number of Muslim widows.

According to him,  “the place is Dogonawa in Plateau state, a congregation registered 501 widows on 7th March 2001, the figure of widows increased to 900 in 2009,  and as at February 2014, 25000 widows were registered in that congregation in Dogonawa.

However, while the CAN representatives was speaking, former FCT Minister Adamu Ailero from Kebbi, raised a point of order arguing that Mr Emmanuel’s contribution was not consistency with the matter on the floor.

But, the Deputy Chairman, Professor Bolaji Akinyemi overruled Aleiro, urging that the CAN representative be allowed to conclude his submissions.

However, Pastor Tunbosun urged the Conference to make recommendations that would address the issues of equity for Christians. He said the example of South West Nigeria has shown that Christians can live peacefully with the other religion, arguing that Christian do not hate Muslim but rather they live peace and harmony in south-west region of the country.
One issue that dominated debate yesterday at the confab was President Goodluck Jonathan’s inaugural speech, with delegates suggesting solutions on how to move the nation forward.

Speaking on the president speech, former National Chairman of the ruling People’s Democratic Party (PDP), Col. Ahmadu Alli (rtd) stoked controversy with his contribution when he accused the southern delegates of contesting the population figure of the north.

According to Alli, it was mischievous to contest census that was conducted in the past which gave north higher population.

He said the President was sincere in his speech, adding that the speech should form the guiding principles for the conference.

“The president’s speech is the guiding principle of this conference. We must first put Nigeria in the front burner in everything we are doing,” he said.

Ali also drew the ire of some delegates when he faulted the call for the creation of more states by some delegates, particularly those from the South-East.

He took delegates through memory lane of how southern Cameroon seceded from Nigeria soon after independence, but northern Cameroon opted to stay. Alli said this automatically put the northern population above that of the south.

His words: “When we are thinking of creation of states, we must put certain things into considerations. The north is the only place where there is no limit to the number of wives you can marry. Therefore, the number will not diminish. We will continue to grow. It is a fabrication when people say numbers and figures are being fabricated in the north.”

Addressing delegates yesterday at the Conference, Chairman of the Conference, Justice Idris Legbo Kutigi, harped on the need to reach consensus on issues. He reminded delegates that consensus remains the number one option in arriving at issues, saying the 70 percent voting benchmark is secondary in the event that delegates refuse to have a consensus.

Kutigi also told delegates that he has the powers to adjourn sittings in the event that delegates are unable to reach a consensus. He said consensus remains the only thing that unites Nigerians.

Professor Jubril Aminu, urged delegates to ensure that the conference become the last of its kind by addressing the issues once and for all.

He said: “I sincerely and wish that this conference becomes the last one. I hope that we are able to arrive at issues and resolve our problems. The president’s speech has helped to clear the air on a number of issues. He has said that he has no personal agenda. I believe him. We must sit down and plan on how to move this great country forward,” Aminu said.

Another delegate, Mr. Femi Ajakaye from Ekiti state, said the president’s speech was frank and direct. He argued that in Nigeria, people tend to enunciate beautiful and honest ideas, but that the ideas do not go beyond rhetoric.

Ajakaye argued for more patriotism by Nigerians, saying Nigerians must eschew apathy and show the ownership spirit towards the federation in order to address the national problem.

Ajakaye said it was time for Nigerians to stop blaming colonial masters for their woes, arguing that Nigerians should tackle their problems and forge a pathway for the country

According to him, “the president’s speech did not tell us how we can live together. What the Asian Tigers have in common is good leadership. The way we run our services and government should be looked at critically,” he added.

Chief Richard Akinjide said that Nigeria is today the greatest state in Africa. According to him, Nigeria is one or two steps ahead of South Africa, urging Nigerians to cultivate the habit of builders, instead of destroyers.

Professor Dora Akunyili, Anambra state delegate, said she regards this national conference as president’s best centenary gift to Nigerians.
“One thing that stands out in Mr President’s speech is the sincerity. He said Nigeria’s unity is non-negotiable. I am convinced that Nigeria will work. We all want to see a transformed Nigeria. We should work together to build the Nigeria of our dream,” Akunyili said.