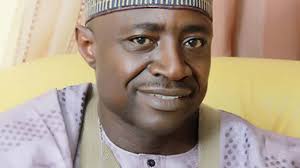 (News Investigators)/ The Executive Vice Chairman of National Agency for Science and Engineering Infrastructure (NASENI) Mohammed Haruna, says he is more determined to make more impacts on indigenous development of industrial tools and machine parts that would earn global recognition.

Prof. Haruna told staff and employees of the Agency to cooperate with the management of NASENI to deliver on the mandate of the organization.

The Chief Executive Officer who has just resumed his 2nd term tenure of 5 years spoke to a large crowd of staff members who welcomed him back to office. He expressed happiness at the overwhelming support, saying it makes us more determined than ever to move the Agency forward”

He was received in the Agency yesterday by the outgoing Acting Executive Vice Chairman of the Agency, Engr. Dr .A.M Adnan amidst exciting welcome jubilation songs by friends, staff, Union members who expressed joy that Professor Haruna returned to serve the Agency once more.

“While appealing to the management and staff of the Agency to bury hatchets, and to forgive one another, he said, whoever was offended in one way or the other during his first tenure in office or while he was away, should please find a place in the hearts to forgive,” Deputy Director, Information and Protocol, Olusegun Ayeoyenikan said in a statement.

According to him, what is paramount for all employees of NASENI including himself was to move the Agency forward and to make it not only a hub for technological development but also a take-off house for industrial revolution for the nation, Nigeria,” the statement added.

Engr. Prof. M.S. Haruna who was beaming smiles while addressing the crowd said he was overwhelmed and therefore short of words to express his gratitude to God for giving him another opportunity to work for the Nation.

He explained: “although what transpired in the Agency in the last few weeks was an embarrassing situation which portrayed the Agency to the world in bad light, but that incident was now history. We are even more determined to make more impacts on indigenous development of industrial tools and machine parts which will be recognized not only in Nigeria but the whole world”.

He noted that being a Chief Executive of an organization is something that is temporary and will end one day. Time and space are but a passing moment. I have seen it happen in other countries where past chief executives of organizations like NASENI now sit as co-worker together with former subordinates to deliberate on issues which concern their organizations. He said such situation exists presently in Indonesia, Thailand and Malaysia. The most important thing should the success of the mandate of the organization which employed everyone. Professor Haruna further stressed that “anybody amongst my present staff could become my boss one day and these are things that make us all to be humble”.

On what is expected of him as EVC/CE in the next five years, he said NASENI is more determined to thrive on technological advancement, adding that the Agency would focus more on things that would transform the rural areas and the SMEs.

Haruna also stated that the challenges the Agency is facing now is that Nigerians generally don’t believe in Made-in-Nigeria technologies or products. It is not only NASENI which suffers this public response presently. He assured that once the Agency is recognized by the present administration and the entire nation, the issues of job and wealth creation will be solved.

He however appealed to the entire staff and management of the Agency to join hands with him in moving the Agency to greater heights. He urged all aggrieved persons once more to bury their hatchets and to embrace peace for the betterment of the nation.

After the initial ceremony, Professor Haruna, as Chief executive, went into close door meeting with expanded management team of the Agency comprising of management of the headquarters led by him, Managing Directors/Chief Executive of nine (9) development institutes under the Agency, their respective directors and deputy directors, including Head of four (4) emerging institutes.

It is a new dawn in NASENI. The meeting resolved and pledged to work together to move forward the Mission of the Agency which is:

“To Establish and nurture an appropriate and dynamic science and engineering infrastructure base for achieving home initiated and home sustained industrialization through the development of relevant processes, capital goods and equipment necessary for job creation, national economic wellbeing and progress.”