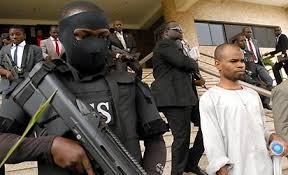 By Nuel Suji, Abuja – The Department of State Services (DSS) has confirmed the arrest of two of its five staff members allegedly involved in the last month robbery of a Bureau De Charge in Abuja by armed bandit.

The DSS operatives alongside five military personnel led by a Captain had robbed the Bureau De Charge operators in Abuja carting away millions of foreign currency.

The DSS in a statement Monday said the service “wishes to inform the general public that the Service has arrested two (2) out of five (5) of its Staff involved in the robbery and sharing, on 20th November, 2015, of the sum of three hundred and ten million naira (N310m) belonging to a Bureau De Change operator in Abuja.

“While three (3) of the DSS staff are now at large, the Military Authorities have commenced a detailed investigation of five (5) of its personnel involved in the crime,” it stated.

Adding that, “Preliminary investigations have revealed that Abdulrasheed Ahmadu MAIGARI of the DSS, conspired with four (4) other colleagues of his namely: Solomon INUSA, Peter OKOYE, Patrick ISHAYA and George Mwatapwa IBBI, to carry out this reprehensible act.

“The five (5) military personnel were led by one Capt. Hussein Ishaku MSHELIA. Meanwhile, the Service has arrested MAIGARI and IBBI; and MSHELIA equally arrested by the Army authorities. Efforts are ongoing to apprehend those still at large. A total of Sixty-Six Million Four Hundred and Thirty Seven Thousand, Four Hundred and Forty-five Naira (N66,437,445.00) and Six Thousand Two Hundred Dollars ($6,200) have so far been recovered, while efforts are being made to recover the remaining amounts.

“It is to be noted that security agencies now act in concert, thus the joint investigation undertaken with the Police, Army and the DSS.

“This action of the Service is in line with the posture of the current Administration and DSS management focus on professionalism, transparency and accountability. Those so far arrested have been suspended pending the completion of investigations.

“For the avoidance of doubt, the Service wants to reiterate its commitment to the basic ideals and principles as established by its forebears and will not spare anyone found to be contravening the rules and regulations or the laws of the land.

“We therefore encourage members of the public with useful information that could lead to the arrest of those at large to volunteer same to the Service or other security agency. The DSS also wishes to use this opportunity to assure all law abiding citizens of their safety and urge them to partner with the Service in the smooth discharge of its responsibilities.”