The All Progressives Congress Presidential Campaign Organisation (APCPCO) has challenged the Minister of Finance, Dr. Ngozi Okonjo-Iweala to clear her name on the allegation of missing N30 trillion under her watch. 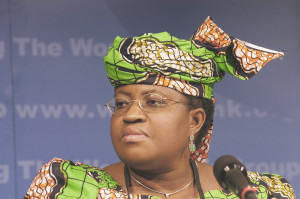 In a statement in issued by its Director of Media and Publicity, Mr. Garba Shehu, in Abuja Thursday, APCPCO condemned what it called “the blanket of secrecy surrounding the transactions that led to the wanton waste of the country’s scarce resources under the Jonathan administration.

“Dr (Mrs) Ngozi Okonjo-Iweala should speak up on this allegation of epic proportion. She has the responsibility to give an account of the management of the nation’s resources under her watch.

“It is not enough for Okonjo-Iweala to boast of rebasing the economy and declaring it the largest in Africa, without a concurrent reduction in poverty and unemployment or infrastructure development in the country.

“It is ironic that rather than tackle the accusation from Soludo, the Finance Minister has been canvassing a stance in the media that Nigerians should brace up for a hard time to come as the economy is nose-diving.

“Only last year, the workforce of several MDAs could not receive their salaries to celebrate the Yuletide season due to government inefficiency. A recent African Union report also alleges that billions of Naira is illicitly taken out of our economy annually.

“Thirty Trillion Naira will fund the generation of 22,000 megawatts of electricity, which is well in excess of the current national power demand of 15,000 megawatts, among other pressing needs.”

Shehu assured that General Muhammadu Buhari if given the mandate to pilot the affairs of the country will wage an unrelenting battle against corruption and wastages in the system and that the recouped monies would go a long way in funding some of the initiatives of an APC administration.