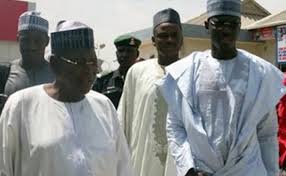 Senior Lamido, Aminu and Mustapha, his sons were remanded in prison on July 9 following a federal high court directive in Kano.

They are standing trial in over an alleged N1.35 billion case bothering on money laundering levelled against them by the Economic and Financial Crimes Commission (EFCC).

The accused were later moved to Kuje prison in Abuja ahead of another court hearing on their bail application.

The Judge rejected the argument by the EFCC that the accused had earlier been granted administrative bail and that their latest objection to bail was based on the weight of new evidences gathered against them.

Justice Kolawole said that argument is not strong enough to hold the court from exercising its discretion in favour of an accused person.

The accused were consequently granted bail upon endorsement of N25 million bail bond each, with two sureties each, one of which must be a civil servant of grade level 16 or retired as such, or a businessman who owns a landed property worth not less than N75 million in Abuja or Jigawa state.

The were in addition to directed to submit their travel passport to the court.

The former governor was arraigned alongside his children for receiving N1.35 billion kickback from a government contractor.

The money was allegedly paid into accounts controlled by the governor and his sons.