Home Featured Posts My Suspension ‘ll Not Stand, Says Jibrin, Asks Dogara, Lasun Others To...
Facebook
Twitter
Google+
Pinterest
WhatsApp
By Nuel Suji – Embattled erstwhile chairman of the House of Representatives Committee on Appropriation, Abdulmumuni Jibrin has vowed to fight on despite his suspension, even as he reinstated demand for details of “running cost’ by Speaker Yakubu Dogara since assuming office.

In a reaction to his suspension from the House for 180 legislative days earlier on Wednesday, Jibrin said the concerned leaders have 72 hours to respond to his query or be compelled to do so legally. 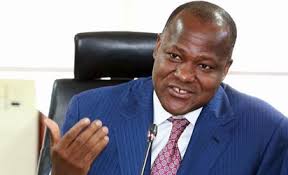 He said he already briefed Mr. Femi Falana (SAN) to file necessary judicial processes on the matter of corruption against the principal officers.

He said in a letter to Dogara, Deputy Speaker Yusuf Lasun, Minority Leader Leo Ogor and Chief Whip, Alhasan Doguwa that he would not back down on his struggles to battle corruption in the conduct of business in the House.

He said: “You will recall that I have embarked on an Anti-corruption crusade to expose systemic and individual corruption in the House of Representatives and push for reforms that will wipe out corruption and ensure that the House conducts its affairs and management of its finances in a transparent and efficient way for the good of our country.

“None of them responded to the allegations neither has any of them with the exception of the House Leader honour the invitation or submit and clear his name before the security and anti-graft agencies. I will follow up on this case until Justice is served.

“Similarly, and in the spirit of opening up the affairs of the House for the Nigerian people, I released figures of the amount each of you received as running cost. None of you responded despite the gravity of the issue. This is an issue that Nigerians in their millions are calling on us to open up. I will take it for granted that you have all denied the allegations.

“It is in view of the above and enforcing that I demand each of you to provide me and make public within 72 hours what you have received in monetary terms as running cost of your offices in your entire stay in the house of Representatives and details of how you spent it, failure of which I will take necessary legal action to compel you to do so.”

Jibrin described the process that led to his suspension as flawed and inconsequential, stressing “it is not going to stand anywhere in the world.

“As you are aware the matter is a subject of litigation, I have instructed my lawyer, Femi Falana SAN to file charges of contempt against Speaker Dogara and of course the House of Representatives and I’m sure the matter will move over to the judiciary and decision will be taken. I’m pretty sure it will be in my favour.”

He also said he owes no apology to anybody saying, “I did not commit any offence, I did not abuse my office. I have said it repeatedly that in the five years that I have served in the House of Representatives, I have never corruptly enriched myself.

“But what is very important also is that now they have done their worst, they have suspended me, what has it changed? Has it changed the fact that the speaker conspired with other principal officers to divert N40 billion out of N100 billion meant for constituency projects.

“Has it changed the fact that he and Alhassan Doguwa hijacked the 2015 MDG projects and everything there in and converted to their personal use? And many other criminal allegations that they committed, it hasn’t changed that.

“At this point, I must say they freed me up to concentrate on the matter in court, I know the suspension is not going to stand, secondly, I’m going into a massive alliance with civil society groups, NGOs and well meaning Nigerian to continue to press ahead. I have said it, not once, not twice that it is not going to be easy. I’m not worried about myself but I am more worried about people around me.

“I think this is a big issue, I’m fighting a group of mafia, I know what they can do. The battle I’m fighting is what Nigerians have always wanted to do in the last 16 years when democracy came to bare, to open the House of Representatives and I’m determined to ensure that justice is served on speaker Dogara and the corrupt body of principal officers and beyond that, reforms to be implemented so we can have a house Nigeria will be proud of.”