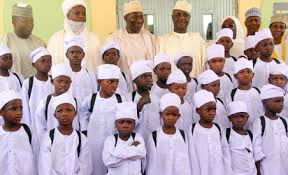 YOLA/By Tom Garba – The Muslim Council of Nigeria (MCN), Adamawa State chapter has called on the federal government to revive and adequately fund the Almajiri and Quranic integration programme.

The group also decried the influx of Quranic School pupils, Almaris, into major towns in the state.

The Almajiri and Quaranic integration programme was introduced by the Goodluck Jonathan administration to carter for the needs of the street-begging kids in the northern part of Nigeria but was cancelled by the Buhari administration.

A communique issued by the group at its two days annual General meeting held at the council secretariat in Yola noted with dismayed and condemn the influx of Almajiris in the state seeking for Quranic Knowledge.

The association called on parents to rise up to their responsibilities in nurturing law abiding and God fearing children in our society by giving them Islamic proper Education than what they are doing.

It read in part: “The Assembly observed with concern the influx of Almajiris in the State, especially in our major towns and cities in the name of seeking Qur’anic Education. It equally noted that the Almajiri system is a cultural practice rather than religious,” the communique stated.

“Parents are therefore, called upon to fear Allah and to give their wards proper knowledge of Islamic and Western Education. The meeting calls on the Federal Government to revive and adequately fund the Almajiri and Qur’anic Integration Programme.” It further reads

The General Assembly had in attendance all the Local Government branches, the leadership of all Islamic Organisations and the Women Wings of the Organisations, members of various Standing Committees of the Council, Imams and notable scholars.

The opening ceremony was conducted under the chairmanship of Alhaji Abubakar Ahmed Song. His Excellency, the Executive Governor of Adamawa State declared the meeting open. Also in attendance at the opening ceremony is the Lamido of Adamawa, ably represented by the Galadima Adamawa, Alhaji Mustapha Aminu, HRH the Emir of Mubi Alh. Abubakar Isa Ahmadu OFR, the Amna of Shelleng, Alh. Abdullahi Isa Dasong, the Speaker, Adamawa House of Assembly ably represented by Hon. Abdurrahman Abubakar, Member representing Mubi South Constituency, Dr. Bashir Imam Aliyu Hong as Guest Speaker, Community Leaders and other top government functionaries and also condemn the alarming rate of drug abuse among the youths in the state.

“The Assembly noted with dismay the alarming and growing rate of Drug Abuse and its associated consequences such as violent crimes, rape, theft and other crimes, especially among the youth in the State. Equally disturbing such dangerous phenomenon is gaining ground among females. The meeting therefore calls on parents to be more alive to their responsibilities including keeping an eye on the day to day activities of their wards. Also, the NDLEA and other Security Agencies should be vigilant and more serious in prosecution of offenders.”

The communique also reads that :

“The Assembly observed with great concern the increasing rate of unemployment among our youths, both male and female in the State and the consequences of this phenomenon cannot be over emphasized. It therefore calls on the State Government to initiate youth employment generating programmes and to revive the dormant Skills Acquisition Centres built across the State to help reduce the trends.

It condemned in strong terms “the unnecessary wanton killings of Fulani women and children, destruction and looting of their properties and food stuff, killing of their animals by some criminal Batchama militia in Numan LGA on 20th November, 2017. It equally condemned the subsequent killings of the Batchamas on 4th of December, 2017.

“The Assembly also observed with great concern the continued burning of villages and mosques, killings and kidnapping of the Fulanis and other tribes through guerilla tactics by the Batchama Militia in Numan, Lamurde and Demsa LGAs.

“The Assembly further observed with great dismay, the mounting of illegal road blocks, terrorizing innocent travellers particularly fulanis and extortion of money from them within Demsa, Numan and Lamurde LGAs by the same Militia. The Assembly is worried that such illegal activities sometimes are carried out in the presence of some policemen, who adopt lukewarm attitude on the activities of the militias who also go about freely brandishing dangerous weapons.

“We are also disturbed that no effort was made so far by the Traditional Rulers of that area to check the illegal activities of the Batchama Militia and to bring reconciliation between the aggrieved parties. This indeed is a clear indication of failure of responsibilities or approval by the Traditional Leadership of the area with the activities of the criminal militia.

“The Assembly therefore calls on the Federal and Adamawa State Governments to as a matter of top priority find a lasting solution to the recurrent unnecessary crisis and deliberate displacements/cleansing of Fulanis within Numan, Demsa and Lamurde LGAs so that peace and understanding will return to the area.

“The Assembly also reiterates its call on the Security Agencies particularly the Police to as a matter of urgency provide security cover and stop discriminatory attitude towards the Fulanis. We once again called on the Adamawa State Government and the Numan LG Council in strong terms to disban the so called Local Vigilante Groups that terrorize Fulanis and other Muslims in the area.

“The Assembly approves the position of Fatwa Committee as   supported by the GPC of the Council that henceforth all fatwa of the Council shall be based on the opinion of Imam Malik School of Thought.

“The Assembly observed with dismay on the care free attitude of some Muslim men who are fond of misusing the right of divorce given to them by Shari’ah. It therefore calls on all Muslims to fear Allah and to respect the institution of marriage and be reminded that marriage is an act of Ibaadah.

“The Assembly also endorses the position of the fatwa committee that anybody who divorces his wife three divorces in one pronouncement, (either written, verbal, through text message, etc) is deemed to have divorced her three times.

“The Assembly observed with dismay lack of Muslims participation in the ongoing Voter Continuous Registration by INEC for those who attained the age of 18 and those who have not yet registered. It therefore urged all Muslims, men and women, to as a matter of civic responsibility take the issue very serious and a top priority to go out and participate in the exercise no matter the challenges. It noted that this is the only surest way of electing candidates of their choice.

“The Assembly commended the developmental strides of His Excellency, the Governor of Adamawa State, Sen. Muhammadu Umaru Jibrilla Bindow. It further commends him for his open door policy and concern for the masses of the State and urges him to continue on that spirit. It further calls on all Muslims to support him and to continue to be peaceful and law abiding.

“The Assembly also appreciates HRH Lamido Fombina, Alh. Muhammadu Barkindo Aliyu Musdafa, PhD, CFR, Intl. Grand Patron Tabital Pulaaku Intl, the Grand Patron of the Muslim Council of Adamawa State, and other Royal Highnesses in the State for their Fatherly guidance, support and cooperation to the Council in discharge of its duties.

The Assembly said it “appreciates the support and cooperation extended to the Council, its LG Branches and affiliate organisations by the Security Agencies in the State. The Assembly also commends the President of the Federal Republic of Nigeria, Muhammadu Buhari for his efforts in fighting insurgency in and bringing about peace in the region. It further commends the various Security Agencies in maintaining peace and order, despite their numerous challenges, especially the Military in the fight against insurgency in the Northeast.

“It calls on them to deploy and use more intelligence gathering system on security threats in order to, nip in the bud, all potential threats before it escalates. It further calls on all Muslims to continue to pray for peace and peaceful coexistence and assist the Security agencies in their legitimate duties.

On Muslim unity, “the Assembly noted with appreciation the level of cooperation and understanding among Muslims, especially Muslim organisations to the Council. It further emphasizes such level of understanding should be maintained and improved upon. It calls on all Muslims to avoid any issues that are likely to bring unnecessary dispute that could bring disunity among them. It reminds all Muslims the verse of the Holy Qur’an 3:103.NJ

“And hold fast (all of you) to the rope of Allah and do not be divided”. “