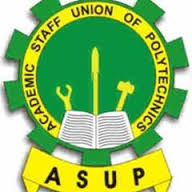 By Tom Garba, Yola – The Academic Staff Union of Polytechnics (ASUP) Mubi Chapter has withdrawn its activities from its national body.

Mr Martins Bunu, the chairman of the chapter made this known on Tuesday at a press briefing in Yola.

Bunu stated that the decision to suspend its activities with the national body was taken at an emergency congress meeting held on Monday at the Federal Polytechnic Mubi.

He said that the style of leadership demonstrated by the National Executive Council (NEC) was not in the best interest of the local chapter, especially as regards the issue of welfare for members.

According to him the NEC only recognizes the chapter only when it comes to remittance of check-up dues and also foisting of the impeached former chairman on the chapter.

He cited the example of the recent invasion of the Boko Haram insurgents which claimed the lives of many lecturers and students in the polytechnic in which ASUP did not only visit the union but failed to send a sympathy massage.

“We members of ASUP in Mubi have decided to detach ourselves from our national union for now pending when the national leadership will consider us as stakeholders in the union movement.

“We feel neglected and ignored when it comes to the issue of welfare especially when we lost our members during the insurgency attack and the national body turn its eyes against our plights.

“It is quite disheartening that when we were in exodus to Cameroun, ASUP was still deducting our dues yet to even identify with us became a mirage.

“This has demonstrated to us that our chapter is not considered in the union hence the primary objective of a unionist is welfares and this is alien in ASUP.

Martins also lamented injustice and impunity in managing Mubi chapter of the union, adding that the NEC only came to Mubi when the union did not comply with the last national warning strike embarked by the union.

He noted that when the union in Mubi was confronted with several challenges, the NEC did not deem it fit to come.

He also noted the planned imposition of the impeached former chapter chairman Mallam Mohammed Kabiru whom they feel can be able to execute their nefarious agenda.

“Our massage to the ASUP is that the leadership must learn to build and not to destroy, must learn to do justice and not injustice.

“It is worrisome that when we were confronted with myriad of challenges, they did not deem it fit to come until recently when we did not join its national warning strike that the national body felt necessary to come and create crisis within the hitherto peaceful union in Mubi.

“We cannot continue to identify with a union which does not have the interest of members at hearth only to pursue it selfish agenda and execute its ulterior motives.

We cannot continue with a union that it’s only interested in our check-up dues and winning elections but cannot assume its responsibility when members are faced with problems.

We also condemned in its entirety the show of shame exhibited by the Council of National Officers (CNO) last weekend at Mubi all in the name of imposing a single individual on the union, impunity is not known to be in unison with ASUP constitution, it is a display of rascality led by the ASUP president, Mallam Usman Dutse.

“For this we have deem it fit to discontinue our participation with the national body until when the right thing is done,’ Martins said.