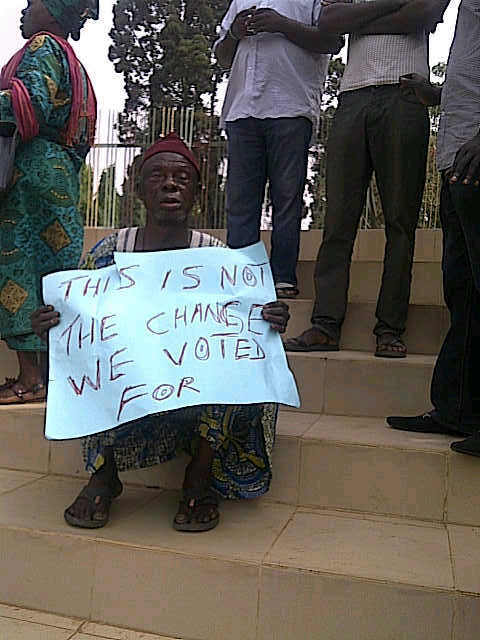 (LAGOS)By Dipo Awojobi – Residents of Mosafejo Village, Oshodi, Lagos has cried out over the demolition of their houses by agents of the state Ministry of Physical and Urban Planning. 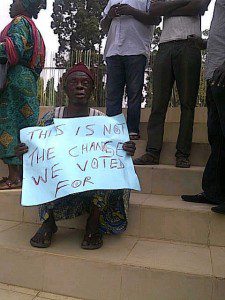 The protesters, who chanted different solidarity songs, carried placards with various inscriptions like: “we are now homeless”, “This is not the change we voted for”, and “Please save our Community”.

Others are: “This is injustice”,”We want justice for Mosafejo, Community”, “they pushed us away from our house will bulldozer”, “We have always been voting for you, don’t afflict or oppress us”.

The called on the Speaker of the House, Rt. Hon. Mudashiru Obasa and Hon. Folajimi Muhammed, who is representing the community at the Assembly to prevail on Gov. Akinwunmi Ambode to restore their property.

The group also appealed to Senator Olamilekan Adeola, and Hon. James Faleke, who are representing the community in the Senate and the House of Representatives respectively to save the community from demolition.

They also went to the Assembly with a protest letter addressed to the Speaker of the Lagos State House of Assembly and dated February 8th, 2016 with the title; “Invasion/Demolition of Mosafejo Village, Oshodi By Lagos State Government: A Call For Justice.”

In the letter, which was signed by Comrade Buna Olaitan of Human Rights Monitoring Agenda (HURMA), it was stated that “Our attention has been drawn to the invasion and demolition exercise on-going at Mosafejo Village by the Lagos State Government.”

They stated that the entire community was given a 7-day notice to vacate the entire area, adding that before the expiration of the notice, some task force officials came with hoodlums and chased people away, which they said was reported at Alausa.

“Though the place was visited by Governor Akinwunmi Ambode, he only directed us to meet with the Commissioner for Physical Planning, who later insisted that we vacate within stipulated time.

“While the community was trying to seek the attention of the Lagos State Government to have proper understanding, caterpillar and bulldozer were moved to the area and before the arrival of HURMA, the entire village has been brought into extinction,” they said.

The organisation subsequently demanded the immediate withdrawal of police and taskforce officials from the community, and the arrest and prosecution of police officers, who worked with hoodlums to rob the people of their properties.

They called on the Lagos State House of Assembly and Governor Akinwunmi Ambode to give immediate attention to the residents of the area, who are internally displaced.

“A call on the Lagos State Government to rebuild the entire place and as well as compensate the affected people,” they added.

Speaking on the matter, a youth leader in the area, Mr. Yemi Babatunde stated that the Ministry brought the notice on 11th January only to come back with a two-day notice on 14th January before the houses were eventually demolished on Friday 6th February, 2016.

“We had been seeking approval for the 72-year old area since 2008. Former governor Babatunde Raji Fashola was in the place in January, 2014 and he said that we should see the then leader of the state taskforce brigade, Mr. Bayo Suleiman, but we could not settle the matter then,” he said.

He stated that the land in the area was acquired in 1937 and that people have been living in the area since 1944.