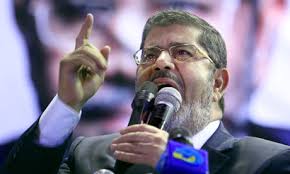 Ousted Egyptian President Mohamed Morsi, has been sentenced to 20 years in prisonment over the killing of protesters in 2012, the first verdict to be issued against the country’s first freely elected leader.

The Cairo criminal court issued the verdict as Morsi and other defendants in the case – mostly Muslim Brotherhood leaders – stood in a soundproof glass cage inside a makeshift courtroom at Egypt’s national police academy.

The case stems from violence outside the presidential palace in December 2012. Morsi’s supporters attacked opposition protesters, sparking clashes that killed at least 10 people.

Judge Ahmed Youssef dropped murder charges and said the sentence was linked to the “show of force” and unlawful detention associated with the case.