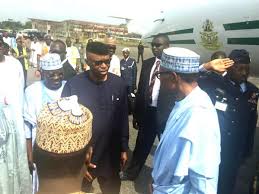 By Nuel Suji – Governor of Ondo State, Olusegun Mimiko has dismissed as untrue, the speculation that he is meeting with President Mohammadu Buhari in a bid to join the All Progressive Congress (APC).

Mr. Mimiko said his recent meetings with Mr. Buhari were meant to brief the President on security situations in Ondo State.

The governor spoke on Monday at the Presidential Villa, Abuja where he held another closed-door meeting with Mr. Buhari.

It was the third private meetings held between the two, the first being October 28, 2016 after a federal high court ordered the replacement of Eyitayo Jegede names with that of Jimoh Ibrahim, as flagbearer of the Peoples Democratic Party (PDP) governorship candidate for the forth-coming elections.

The governor had rushed to Mr. Buhari to brief him on the security situation following protest across the state.

The governor also met briefly with the President for the second time last Saturday when he received him at the Akure airport during Mr. Buhari’s campaign visit to the State, fueling speculations that he might be defecting to APC.

However, Mr. Mimiko dispelled the rumour during his visit to Aso Villa Monday saying, “this is my second visits to the Villa since this crisis in our party started. Like l said, as the chief security officer of my state, if there is any credible threat to security, I owe the responsibility to Nigerians to inform Mr. President of what is going on in the state,” he said.

He explained that he was at the Akure airport on Saturday to receive Mr. President as a matter of protocol.

According to the governor, protocol demands that he accords Mr. Buhari the normal courtesies as the president of the nation irrespective of his mission there.

“Mr. President was in my state to campaign for his party. I extended to him the courtesies of receiving him at the airport and seeing him off as President of the Federal Republic of Nigeria, not as APC.

“I understand that people have speculated that this means I am going to APC. There is nothing of such. I only extended him normal courtesies that protocols demand.

“And I have also come to brief him about the security situation in my state.”

Mr. Mimiko, arrived the villa at about noon, went straight into the president’s office for a closed-door meeting. The meeting lasted for about 30 minutes.

The governor also met briefly the Chief of Staff, Abba Kyari, where he also spent another 30 minutes.

On whether the PDP is planning to form another party due to its current crisis, the governor retorted: “I am just concentrating on the case of my party in court.”