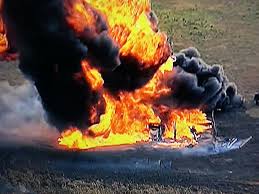 Already valves and supplies have been shut down to suffocate the fire which engulf the scene of the incident.
Official of the National Emergency Management Agency (NEMA) confirmed the incident.

The official however, said safety officials from NNPC Atlas Cove base are already working to put out d fire.

Meanwhile, the missing body of the victim of the yesterday boat mishap at Tin Can Island have been recovered.

“It was recovered this morning and handed over to the family members accordingly,” NEMA official said.