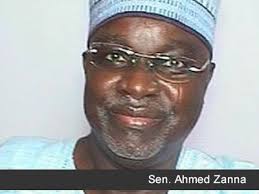 By Nuel Suji, Abuja.
The President of the Senate, Sen. David Mark has expressed grief over the death of  Senator Ahmed Khalifa Zanna who until his death represented Borno Central in the upper legislative chamber.

A statement by his Chief Press Secretary, Mr. Paul Mumeh, in Abuja on Saturday quoted Sen. Mark describing Zannah’s death as “one too many.”

“The President of the Senate noted that Zanna was a gentleman who was very mindful of his legislative assignments and the welfare of his constituents and the nation at large.

“He described late Zanna as a fine parliamentarian who contributed his quota to the success of the 7th Senate.

“The Senate President lamented that Senator Zanna would have waited till the end of the 7th Assembly in a few days time but God knows the best time for a man to be born and when a man should die,” it stated.

According to Mark:”Senator Zanna’s death coming a few days after the demise of Senator Uche Chukwumerije is a big blow to the Senate and the nation. This is certainly not the best of times for us. These deaths in quick succession is heart breaking.

“We cannot question the will of the Almighty . We can only ask that our Creator give us the fortitude to bear this sad loss and grant the deceased eternal rest,” it further added.

Meanwhile, the Senate has expressed shock over the sudden death of Senator Ahmed Zannah.

In a statement by its Spokesman, Se. Enyinnaya Abaribe, the senate expressed shock that Zannah died at a crucial time when the senate is rounding up the 7th session.

“The Senate will surelly miss his painstaking approach to committee work and care for legislative details with regards to bills and motions.”