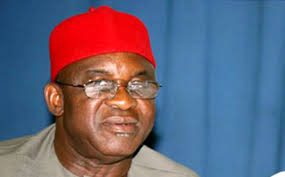 A statement signed by the Chief Press Secretary to the President of the Senate, Mr. Paul Mumeh said INEC’s National Commissioner, Lawrence Nwuruku, presented the certificates to the Benue senators at the National Assembly.

Mark would be returning to the Senate for the 5th time on the platform of People Democratic Party (PDP), his first being 1999 when he was elected to the upper legislative chamber.