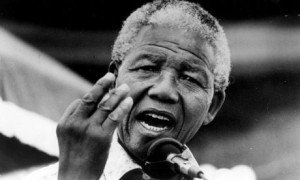 Nigeria President Goodluck Jonathan may not be among the dignitaries to speak at the occasion lined for the burial of the late South African anti-apartheid hero Dr Nelson Mandela after all.

South Africa’s government has released the list of speakers for the Tuesday memorial, expected to last four hours at stadium at Soweto Township near Johannesburg.

The list which did not include the Nigeria president is coming at the heels of outburst by Governor of Lagos State, Babatunde Fashola who lamented that Nigeria’s pivotal role in South Africa’s anti-apartheid struggle which the late Mandela exemplified was not well acknowledged.

Others are, Namibian President Hifikepunye Pohamba, Indian President Pranab Mukherjee and Cuban President Raul Castro, while South African President Jacob Zuma will give the keynote address. Mandela’s family and friends also will speak at the ceremony, which will include a sermon.

Fashola regretted that many of the countries of the world who are loudly celebrating the exit of Nelson Mandela today were the supporters of the apartheid regime of the time.

About 100 Heads of State are expected to assemble at the 95,000-capacity FNB Stadium for the Tuesday memorial for the anti-apartheid icon. Mandela made his last public appearance at the same stadium for the closing ceremony of the 2010 World Cup, when the venue was called Soccer City.

“We will be on hand to make sure people are able to grieve in a safe environment,” Makgale told The Associated Press.

Makgale said a joint taskforce of police, diplomats and intelligence service personnel already have been making plans and talking to the foreign delegations who plan to attend the ceremony.

Less than 20 hours before the event, ground crews cut the grass in front of the stadium. Workers inside welded scaffolding for a stage and installed bulletproof glass to protect foreign leaders.

US President Barack Obama and his wife Michelle left Washington for Johannesburg aboard Air Force One on Monday. In a rare get-together, they were joined by former President George W. Bush, his wife Laura and former first lady Hillary Clinton. Former Presidents Bill Clinton and Jimmy Carter are travelling separately to South Africa.

“Whether we have 10 heads of state coming or 70 or 100, we do have the capacity and plans in place to facilitate their movement,” Makgale said.

Though security remains a concern, an AP reporter walked unsearched into the stadium Monday by showing only a national press card issued in Europe. It took about three minutes before a security officer asked journalists to leave the stadium’s field. However, reporters could freely roam throughout the stadium, walk the aisles and see the ongoing stage construction.

Officials from the US Consulate in Johannesburg also toured the venue Monday, but declined to speak to journalists.

“I’m doing this from the bottom of my heart, just to thank Tata,” Mathabe said, using the Xhosa word for father as an endearment name for Mandela. “My son is coming tomorrow as a visitor too. He’s going to live in a free country. He’s going to be able to do whatever he likes thanks to Tata.”

Roads several square kilometres around the stadium will be closed Tuesday, and people will have to walk or take public transport to the stadium. Nearby stadiums equipped with viewing screens also will be open to accommodate overflow crowds.

Government Minister Collins Chabane told journalists Monday that officials “can’t guess” how many people will attend or will try to enter the stadium.

“Once we see that the numbers are becoming unmanageable … access will be denied,” Chabane said.

Mandela died Thursday at age 95. After the stadium memorial on Tuesday, Mandela’s body will lie in state at the Union Buildings, the seat of government in South Africa’s capital, Pretoria, from Wednesday to Friday. He will be buried Sunday in Qunu, the Nobel Peace Prize laureate’s rural hometown in Eastern Cape Province.

South Africa’s parliament held a special session Monday in honor of Mandela. Kgalema Motlanthe, the country’s deputy president and a member of Mandela’s African National Congress political party, opened the proceedings with a speech describing how the icon’s death caused a “sweeping feeling of sorrow” around the world.

“He belongs to all humanity,” Motlanthe said. He added: “Mandela’s ideals saturate the face of the Earth.”

Helen Zille, the leader of the opposition Democratic Alliance political party, said South Africa inherited “an enormous responsibility” from Mandela to ensure everyone had “freedom you can use.”

“He has handed the baton to us and we dare not drop it,” Zille said.

Outside the parliament building in Cape Town, people laid flowers at the foot of a large image of Mandela. Choirs sang and a big screen projected old video footage of Mandela speaking in parliament.

Two banners flanked an entrance to the building. One showed a young Mandela in traditional garb and the other elder Mandela in suit and tie.

Hundreds of visitors left written tributes. One in the sea of messages read: “No words are enough to describe the worth of your actions.”