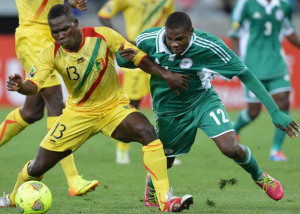 The Nigerian national team, the Super Eagle today lost their first match 2-1 to their Malian counterparts at the on-going CHAN 2014 tournament in South Africa.

The Eagles squad which are mainly home-base lost control of the game to the Malian at the early stage and got punished by Abdoulaye Sissoko who opened scoring for the West African country in the 18th minute after the Super Eagles gave the ball away in their own yard.

The Malians were obviously the better side in the fist half as they dominated a Nigerian team who did not seem to understand one-another, especially in the midfield.

Adama Traore sealed victory for Mali 5 minutes into the second half. Sidibe chipped the ball towards Traore, who apparently was unmarked for the forward and the forward unleashed a convincing shot past the Nigerian goalkeeper.

Although, the Nigerians put up a fairly better performance in the second half, but their efforts were not enough to redeem the scoreline against their opponents, who unarguably deserved the win.

Nigeria’s next game is againt Mozambique before taking on their South African counterparts in their last group.