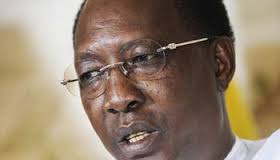 The President of Chad Idriss Deby declared that the regional force made up of Benin, Nigeria, Chad, Niger and Cameroon will finish off Boko Haram remnants by the end of 2015, even as he disclosed that one Mahamat Daoud is now the new leader of the Islamist insurgents.

Chadian president told news reporters in N’Djamena the capital city of Chad, that Boko haram has been decapitated, and the Regional force will finish off the Islamic Fundamentalist by the end of the year.

He also told news reporters that Boko Haram is no longer led by the elusive Abubakar Shekau who according to Derby has been replaced by a new leader in the name of Mahamat Daoud, who is ready to negotiate terms of surrender with the Nigerian Government.

The reason for the change of leadership is however unclear, but earlier reports suggested that Shekau may have either been injured or killed in one of the operations with the military. The erratic Boko Haram former leader was also absent in the latest video released last week be the insurgent.

Unconfirmed media report published by Africa Business World quoted Deby as saying that “Boko Haram is no longer what it used to be. It has been decapitated and now operates as small groups largely in the North Eastern Nigeria and around the Nigeria-Cameroon Border.

According to the report, “Derby also told the news media that the new Regional Force will begin operations in a few days. He further advised that there should be no negotiations with the terrorist Boko Haram.

He said the group still poses some threats through suicide bombers, and they have lately resorted to using women suicide bombers to stage attacks in Northeast Nigeria, Chad and Cameroon.