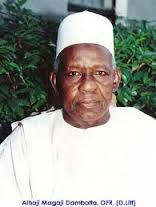 By Adesuji Emmanuel, Abuja.As officials of the 2014 National Conference were winding down activities at the Secretariat, another sad news of the death of a delegate was received Wednesday.

Mr. Magaji Dambatta OFR, CON, a delegate on the platform of Socio-political/Cultural and Ethnic Nationality Groups, from the North West Zone. died a few hours ago at the Garki General Hospital, Abuja where he was taken to after an unsuccessful medical trip abroad.

An indigene of Kano State, Dambatta was born in 1931. He attended the Bayero University in Kano and worked as a Senior Reporter and Northern Regional Editor of the Nigerian Broadcasting Corporation (NBC). He was a Senior Information Officer in the Northern Nigerian Government and an Information and Public Relations Officer in the Regions Agent General’s office in 1961.

The late Dambatta was also a Chief Information Officer in the Northern Region and  Reporter and Editor of the Daily Comet in Kano between 1950 and 1953. He was a Minister in the Nigerian Embassy in Washington CD between 1973 and 1978 and later a Board member of daily Times.

He was also Chairman of the Board of Trustees of Arewa Consultative Forum, founding member, Northern Elements Progressive Union; Recipient of Medal of Merit of the Government of Egypt (1961); and member of the Presidential Advisory Council (2010).

Conference Chairman, Justice Idris Kutigi, GCON, feels deeply distressed by this sad development. On behalf of the Conference Secretariat, Justice Kutigi expressed his deep condolences to the family of the late Alhaji Dambatta and prays that the Almighty receives his spirit and grants his soul sweet repose.

Dambatta’s death was preceded by those of Barrister Hamma Misau (a delegate on the platform of the Retired Police officers), from Bauchi State, on Thursday, March 27, 2014; Dr Mohammed Jumare (A delegate from Kaduna State) who died on Monday May 5, 2014, Professor Dora Akunyili (a delegate who represented Anambra State) on June 7, 2014 and Professor Mohammad Nur Alkali (a delegate from Borno State) on August 1, 2014.