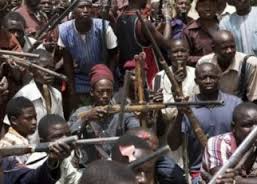 By Dan Garba, Yola – No fewer than seven Boko Haram terrorists were killed, Saturday, by local hunters drafted to support the fight against insurgency at Ghantsa area of Makwan Village in Madagali local Government area of Adamawa state, northeast Nigeria.

The local hunters have been working in collaboration with the military to fight insurgency in the northeast.

The eyewitness said while they were busy with their operations, seven of them met their waterloo when the hunters engaged them with some escaping with bullet wounds into the bush.

“While they were busy burning houses and looting properties belonging to the villagers, some Fulani quickly alerted the hunters who were manning their duty post some killometres away from to Ghantsa area of Makwan village,” the source said, adding that on hearing the news of the attack, the leader of the hunters, Mallam Bukar Jimeta immediately mobilized his men to the area.

The source further explained that “the hunters engaged the members of the insurgency in a cross-fire for close to three hours between 10 pm to midnight on Saturday and they overpowered the invading insurgents resulting in the killing of seven, one was caught alive with gun wounds and other escaped in the bush.”

Confirming the incident, Mallam Bukar Jimeta, the leader of the Hunters Association of Nigeria, said his men killed Boko Haram but refused to speak further on the issue.

A senior military officer, who do not want his name mentioned, confirmed that there was an attack at about 12:00 p.m. on Saturday till 1:00 p.m. of Sunday morning, resulting in the killing of one member of the Boko Haram terrorist.

He said some weapons and ammunitions were recovered from the insurgency and have been handed over the authority concern.