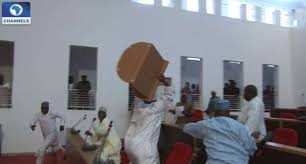 By Dipo Awojobi – The Nasarawa State House of Assembly has placed six of its members on an indefinite suspension for their alleged role in the free for all fight on the floor of the House on Monday. 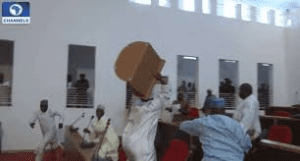 The 6 legislators mainly involved in the disorderliness were summoned by DSS to give account of what happened while the other legislators voted for them to be suspended indefinitely.

The six men  were suspended at the session presided over by the deputy speaker, Godiya Akwashiki for “misconduct and for bringing the House to disrepute” followed by a motion moved by the Majority Leader, Tanko Tunga, who accused them of bringing dishonour to the House.

He was supported by the Minority Leader, Muhammed Alkali and fourteen others legislators present.